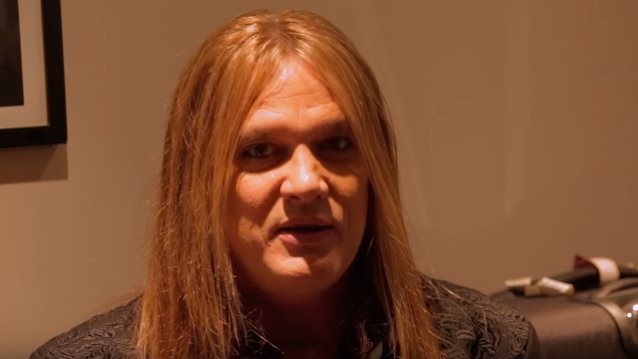 Former SKID ROW singer Sebastian Bach talked to Yahoo! about his decision to leave some of the juicier, more sordid details of his '80s rock-star exploits out of his recently released autobiography, "18 And Life On Skid Row". "There is a section on my computer hard drive which is called 'Cut Out of Book'… This isn't really a tell-all book. It's a tell-some book," he laughed. "I did write down a lot of sex. In my brain, before I wrote it down, I thought, 'This'll be killer in my book! This'll be great!' And then I'm reading it back, and it's like, 'Then she unzipped my fly and reached in for my manhood…' And I'm like, 'What the fuck? This is like being trapped on a tour bus with Billy Bush and the president. You're, like, a creep! Get this out of your book, dude. This is gross.'"

In a 2015 interview with 100 Percent Rock, Bach spoke about his reasons for skipping over a lot of the sex and the drugs in his book. He explained: "When you're writing four hundred or five hundred pages, it's an immense project. It's a huge project. I don't really know if I should tell the dirtiest things that I could, because I'm still wrestling with [the fact that] I have kids, and I don't want my daughter reading something that I haven't told her that I actually did. There's kids to think about here."

Sebastian recently confirmed that he plans to release a second book after spending the next few years focusing on his music career. "I know for a fact there's a second book in me," he told Vanyaland. "I could've kept going on this one, I could've made this one longer, but they cut me off because it's already pretty fucking long. [Laughs] I like to write — I really like it, and I enjoy it. I enjoy making stuff, but the next thing I make will be a record, a vinyl record. That's the next thing that I'm gonna make. But after that, yes, I'll do a book, because they want me to and I enjoy it."

"18 And Life On Skid Row" came out on December 6 via Dey Street Books (formerly It Books),an imprint of HarperCollins Publishers.