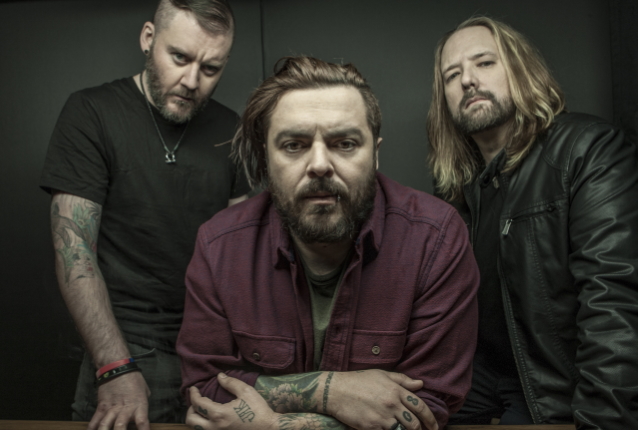 SEETHER will release a new single called "Dangerous" "within two weeks," according to the band's guitarist/vocalist Shaun Morgan.

A short preview clip of the song was made available at the end of Morgan's YouTube live chat and acoustic session on Sunday (June 14). Check it out below.

"Dangerous" will be included on SEETHER's recently completed eighth album, which is tentatively due in the summer.

Morgan spoke about the follow-up to 2017's "Poison The Parish" during a YouTube session on May 24. He said: "The new album is done and basically gonna be, I think, released in August at this point. A lot of it was written over the course of about 10 months. There were about 40 to 45 songs in contention for the album. We ended up settling on recording 21 tracks, which is more than we've recorded before. And yeah, we've kind of whittled down the album to include 13 tracks."

He continued: "It's my favorite album we've done to date — by far. The songs, I think, are the strongest songs we've written. I'm really super proud of it. I produced it again, with Matt Hyde [SLAYER, DEFTONES] engineering and Corey Lowery [guitar], my boy, as assistant engineer, and I think it turned out killer. We worked in a little place called Dark Horse studio [in Franklin, Tennessee], and we did 21 tracks, I think, in about 17 days, which, I think, is a testament to everybody having had the demos for a while and having learned it, so by the time we got in there, we didn't waste any time. We worked long days — we started at about ten o'clock in the morning and worked till about ten o'clock at night. So there was no noon-till-six-type stuff that I've had to deal with in the past.

"I think you'll like the new album," he added. "I do. [Laughs] So hopefully that's universal."

Three years ago, drummer John Humphrey told the Dallas Observer about the more guitar-driven sound of "Poison The Parish": "The intention was to turn up the guitar and bring back a little edge to SEETHER. We've had the honor of working with some great producers, but maybe in the end a few albums were mixed not entirely how we envisioned them."

Morgan and bassist Dale Stewart formed SEETHER in South Africa in 1999 under the name SARON GAS. The band released its first album, "Fragile", in 2000, and eventually caught the attention of American record label Wind-Up Records.