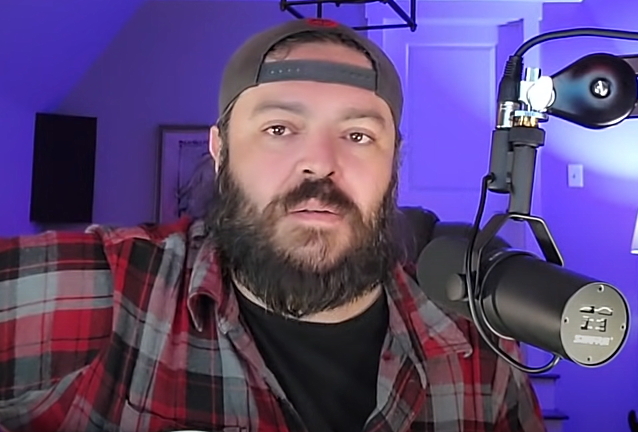 SEETHER guitarist/vocalist Shaun Morgan was the featured guest on BBC's "The Rock Show With Johnnie Walker" during the "Rock God" segment. Shaun picked NIRVANA frontman Kurt Cobain and stated about his choice: "I first heard of NIRVANA in 1993, because, growing up in South Africa, there were sanctions against the country up until '92, so a lot of American music didn't make it through to us. But a friend of mine's parents had been to England and they brought me the CD one day, and there was this naked baby on the front. I went home and put it on and immediately fell in love with the opening to 'Smells Like Teen Spirit' and felt this real ethereal visceral rage that was being spoken about for me. Kurt's voice, the anger with which he played, the lyrics that he wrote all spoke to me as a teenager, and it was perfectly timed with my teenage self and my father not getting on very well. I felt like Kurt's music was speaking for me. I immediately listened to the CD from start to finish and I think I put it on repeat and it must have played 10 or 12 times till I eventually fell asleep that night. The very next day, I went to school and I asked the kid who gave me the CD if I could keep it for a while. And then I said, 'Okay, now I need to find a guitar.' I went and bought myself my first guitar and immediately started teaching [myself how to play]. After I learned how to play 'Polly' through a friend of mine who taught me to play, I started teaching myself the rest of the album, just kind of fumbling about, trying to figure out how to play guitar at the same time.

"That music was so powerful to me as a child that I didn't feel like I was alone anymore," he continued. "'Cause we lived out on a farm and my brother was a bit younger, my parents and I weren't getting on very well, I wasn't particularly popular at school. It felt to me like somebody had my back. And I'd always spent my childhood wishing I had an older brother, so it kind of fit the whole picture for me. And I was a fan for a really long time of the band, right up until [Kurt] died. I remember when he died, I was about 16, and it was a traumatic experience for me. I really felt like I'd lost a friend and a voice. For all those reasons and for being the inspiration for me to pick up a guitar and become a musician, Kurt Cobain was, at the time, my rock god."

SEETHER's eighth album, "Si Vis Pacem, Para Bellum" ("If You Want Peace, Prepare For War"),was released in August 2020. An EP, "Wasteland - The Purgatory", was issued digitally and on CD in July. The five-track set, which was written and produced by Morgan, engineered by the band's newest member Corey Lowery, and mixed by Matt Hyde, also included three never-before-heard songs, and an alternate/stripped down version of "Wasteland".

In July, SEETHER joined 3 DOORS DOWN on the latter band's "The Better Life" 20th-anniversary tour as special guests on select dates throughout the summer.