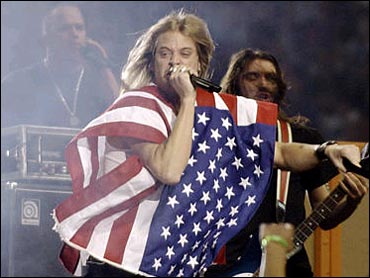 A Democratic senator from Georgia is upset about the American flag poncho that Kid Rock wore (photo) during the Super Bowl halftime show, according to the Associated Press.

"The thing that yanked my chain the hardest was seeing this ignoramus with his pointed head stuck up through the hole he had cut in the flag of the United States, yelling about having 'a bottle of Scotch and watching lots of crotch,"' Sen. Zell Miller said in Washington.

"This is the same flag we pledge allegiance to, the same flag that is draped over the coffins of dead, young, uniformed warriors killed while protecting Kid Rock's bony butt," Miller said.

Miller said the musician should be "tarred and feathered and ridden out of this country on a rail."