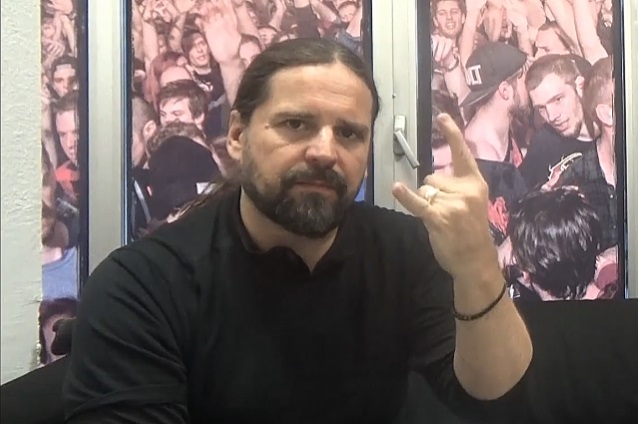 SEPULTURA guitarist Andreas Kisser says that he has "many songs" written for a possible second solo album but that he simply doesn't have the time to work on the follow-up to "Hubris I & II".

A two-disc set, "Hubris I & II" was released in June 2009 via Holland's Mascot Records and was nominated in the "Best Brazilian Rock Album" category at the 2010 Latin Grammys.

Speaking to the Impact metal channel before SEPULTURA's February 25 show in Budapest, Hungary, Kisser confirmed that he has been collecting ideas for another solo effort, but that his busy schedule, which includes touring activity with other projects, has prevented him from being able to take the LP through to its completion.

"I have a demo [of new solo material] — many songs," Kisser said (see video below). "I write music all the time. But, unfortunately, [I have] no time. SEPULTURA is very busy. I have another band, DE LA TIERRA, which we do metal in Spanish and Portuguese. I have different musicians; we have a deal with Sony; we're gonna prepare a new album for next year as well. I have some shows with DE LA TIERRA this year, so it's very hard for me to stop and do that. I have a radio show in São Paulo with my son as well, every Sunday. Of course, I record stuff and send from [the road], because I'm not there, but every Sunday is there; I have to work that as well. But, yeah, hopefully soon."

He continued: "I really wanted to do another album like that and explore stuff that I don't use in SEPULTURA. Although [SEPULTURA's latest album] 'Machine Messiah', I actually use a little bit of my solo stuff. The intro for 'Machine Messiah', for the album, it is very similar [to] some stuff that I did on my solo stuff. Which is great. The music of SEPULTURA is really expanding and opening new ideas… But I don't see myself working on a solo album in the next few years, because a lot of stuff's going on with SEPULTURA and DE LA TIERRA. But who knows? Maybe I'll find a month or two that I could do [it in], but I doubt it. It'll take a while."

Kisser previously described the making of "Hubris I & II" as "a long process, a learning process and a great experience. It's a musical journey through the influences I had for 15 years of my life and at the same time it [was] very different from everything I did [prior to its release]."

SEPULTURA is continuing to tour in support of "Machine Messiah", which came out in January 2017 via Nuclear Blast.