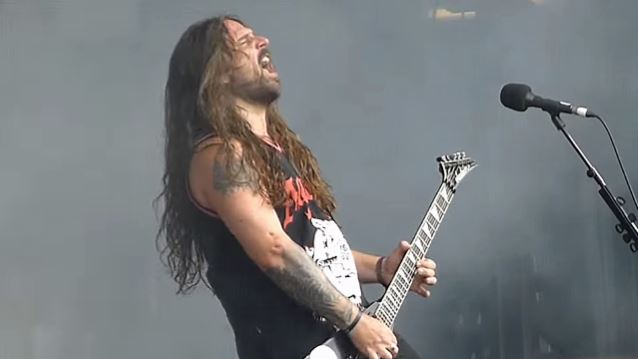 SEPULTURA Concert In Egypt Shut Down By Police

According to Ahram Online, SEPULTURA's June 4 concert in Egypt was stopped by the police because necessary permissions for the show were not provided.

Police forces stormed into the villa on the outskirts of Cairo where the concert was taking place and asked the audience to leave the premises after negotiating with the organizers.

The show was originally scheduled to be held at the Nile Country Club, but was later moved to a villa in Sheikh Zayed.

"We are a touristic location and we always have to receive several permissions. Other locations might not need all this paperwork," the Nile Country Club representative said.

After Nile Country Club's refusal to host the event due to incomplete permits, the organizers secured another location in a private villa in Sheikh Zayed and announced it to the audience shortly before the concert.

The police received a tip that 60 people were preparing for a "satanic party" at a villa in the suburbs of Cairo, General Khaled Shalaby, director of investigations in Giza, said.

Hani Shaker, a popular singer and current controversial head of the Musicians Syndicate, said on TV that the syndicate was informed of an illegal concert being held downtown Cairo. "The devil worshippers were dressed in a very weird style and drew their makeup in the shape of a pentagram," he said. "They wore leather jackets with stars on the back and that is strange."

Just before the show was scheduled to begin, police entered the private villa and asked to see the permissions required for the event to go ahead. When the organizers failed to provide the necessary documents, police asked the bands and the crew to leave and remove their equipment.

It has been reported by some eyewitnesses that Nader Sadek and the owner of the villa were arrested and are currently being interrogated. A report in the privately owned newspaper Al-Watan appears to corroborate the eyewitness accounts, with the article mentioning that three people were arrested, including two of the organizers.

Also scheduled to appear at the event were Sadek and the local bands GORYNOV and PERPETUAL FEROCITY.

The matter is now being investigated by Egyptian National Security.

Shaker made several appearances on privately owned TV channels this past February, claiming that he had canceled two other heavy metal concerts in a bid to prevent "Satanic bands" from performing.