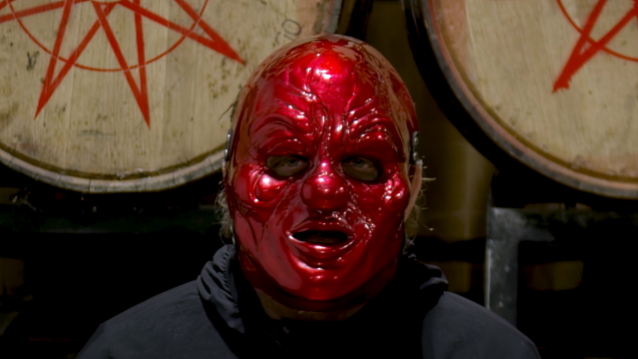 SLIPKNOT's latest album, "The End, So Far", was released on September 30 via Roadrunner Records. The follow-up to 2019's "We Are Not Your Kind", it is the band's final record with Roadrunner after first signing with the rock and metal label in 1998.

In a new interview with NME, SLIPKNOT percussionist Shawn "Clown" Crahan said he was "in love with the idea of having no restrictions". He explained: "I always thought, 'What would it be like if SLIPKNOT was big enough that we weren't held to albums?' Let's say Clown could convince you, 'Hey, instead of waiting two years for 12 songs, I'm gonna give you one song every month.' So in reality, I'm shaving a year off for the same thing.

Crahan went on to say that being unrestrained by the confines of a traditional album will make it possible for him and his bandmates to explore different musical avenues that they wouldn't have been able to in the past.

"I've always thought it would be interesting for our fans to know more about us," he said, "So if the Clown and Corey Taylor and [guitarist] Jim Root were all interested in playing with the Number One sitar player on the planet — and we would be because we're artists — and we brought this person to our location, and this person adorned us with their craft and taught us about the sitar… If we got to sit in and listen, and partake, and touch and smell and feel that vibration… Wouldn't it be interesting?"

He continued: "Let's say that sitar player's on a label and they have management — well fuck it, I'm going to call them up directly and they're only going to have to talk to their label, and their label's going to have to talk to my management. It's not going to be my label and their label, and my management and their management, and then me and the artists. [When it's like that], we never get to work together; we never get to make this piece of art. So being free, in that sense, gives us the freedom to explore deeper, more surreal opportunities to hone in with our craft; it's a win-win for everyone.

"The philosophy is for the fans to be sucked into thought, rather than just heavy metal, record labels, video channels, radio… No, it's the love of music — you love us as artists, you love our band, you know we have our own filter… Look at what we can do when we are free to dip our paintbrushes anywhere."

Last month, Taylor told NME that SLIPKNOT's relationship with Roadrunner deteriorated over the years due to changes at the record company.

"It's such a different label than it was when we first signed with it," he said. "Once you're in the hands of people who don't care, it's just a fucking business. And that's what happened."

"The End, So Far" entered the Billboard 2000 chart at position No. 2. The LP shifted a total of 59,000 equivalent album units in its first week of release, 50,500 of which were traditional album sales.