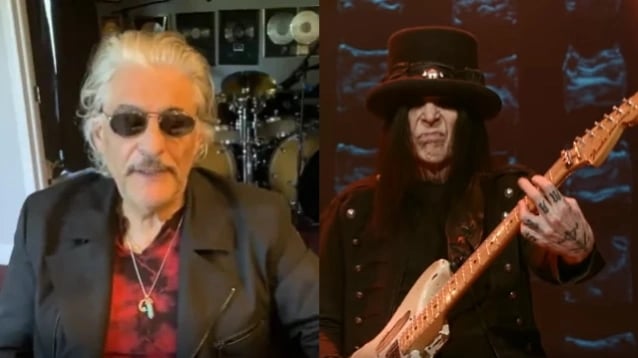 In a new interview with Michael's Record Collection, legendary drummer Carmine Appice, best known for his work with VANILLA FUDGE, CACTUS and Rod Stewart, spoke about his diminished touring schedule as he approaches his 76th birthday. He said (as transcribed by BLABBERMOUTH.NET): "We [in VANILLA FUDGE] don't do big tours anymore 'cause nobody wants to do a big tour anymore. Nobody wants to sit in a bus. We wanna go out, do three dates in close ratio, split a van and we fly to the gig, 150 miles, 200 miles, we're in there for three or four hours and we do the gig. And we go to a hotel and do it the next day. And then third day, fourth day, we go home. Then two weekends later we do the same thing.

"I'm friends with IRON MAIDEN, with Nicko [McBrain, MAIDEN drummer]," he continued. "He left his house in Florida in April. He's coming home next week. He's been on tour the whole time, rehearsing and on tour. We're too old for that. I talked to [guitarist] Mick Mars, who's been touring with MÖTLEY CRÜE. He just gave up his seat in touring with MÖTLEY CRÜE. And John 5 is gonna tour with them. He said, 'Man, we did our final tour [seven years ago]. Now we're out again doing this major tour with DEF LEPPARD.' And he said, 'I don't wanna do it no more. I'm sick of being in a bus.' He said he's gonna do a solo album and go out and do some gigs. I said, 'Look, if you need anyone to play drums, I'll play with you.' He goes, 'That would be great.' So maybe I'll do some gigs with him. But it's not gonna be big tours. It'll be a weekend maybe somewhere and then go home. Two weekends later maybe a weekend and go home."

Mars announced last month that he was retiring from touring with MÖTLEY CRÜE due to his ongoing painful struggle with Ankylosing spondylitis, a type of arthritis that causes inflammation in the spine joints and ligaments and can lead to stiffness over time.

The 71-year-old Mars has struggled with Ankylosing spondylitis since his late teens and spoke about his first experiences with it in CRÜE's 2001 biography "The Dirt".

This past April, Paul Taylor, well known as an accomplished guitarist/keyboardist who has worked with countless artists as a composer and musician over the decades, most famously with WINGER, revealed during an appearance on the "Sonic Dorms" podcast that he spent "the last couple of years" collaborating with Mars on the CRÜE guitarist's long-awaited solo album.

"I wrote most of the record with Mick and [Alabama musician] Jacob Bunton, who sang with [former GUNS N' ROSES drummer] Steve Adler," Paul said (as transcribed by BLABBERMOUTH.NET). "Me and Jacob have written a lot of stuff for TV together. I'm really excited to have that come out, and that, I think, is gonna be towards the end of the year."

Taylor went on to say that he was impressed with Mick's skills as a guitarist and a songwriter.

"Mick is so awesome, and just the endless cool things he comes up with and the palette of sounds," he said. "There's days I just go, 'Is that guitar? Is that you doing all that?' [It's been] really fun. I'm very excited about that."

According to Taylor, he worked with Mars and Bunton on Mick's solo album "for a good year and a half. And Mick doesn't really want me to say too much about it," he explained. "But he said it's okay just to say it's a heavy record — it's definitely heavy — and it very versatile. I feel really lucky that I got to sit and work with him and turn these things into songs. I think it's gonna blow some people away. It's really cool."

Mars has been working on his solo disc — on and off — for at least the past six years. Some of the early sessions for the LP were helmed by recently retired producer Michael Wagener (OZZY OSBOURNE, ACCEPT, WARRANT, SKID ROW) at Blackbird Studio in Nashville, where Mars has lived for about nine years.

Two years ago, Bunton revealed that he was the lead singer on Mars's solo album. Speaking to AL.com, Bunton, who has previously also played with LYNAM, said about his collaboration with Mars: "I can tell you that I'm involved and the past several months we wrote and recorded a record and Michael Wagener produced it. The great Michael Wagener from [mixing 1986 METALLICA album] 'Master Of Puppets' and all that kind of stuff. He worked with MÖTLEY CRÜE on their very first record 'Too Fast For Love', when they did it themselves they recorded the record and then Michael Wagener mixed, and then when they got the record deal with Elektra, [QUEEN producer] Roy Thomas Baker ended up going back and remixing it. But on all of their self-released copies, it's Michael. But to make a long story short, Michael's producing the record because that was the first producer Mick worked with in MÖTLEY CRÜE, so he wanted to do his solo album, so it's been really cool. We've been recording it in Nashville and we're almost done."

In September 2019, Mick told Billboard about the musical direction of his solo material: "[It's] not like today's music, which to me is pretty much pop metal and more growly guys. It's all cool and it's all good, and I'm just searching for something that's just a little different than that. I [also] don't want to be living in '85. It's hard to reinvent yourself, but that's what I'm doing now. I'm trying to reinvent the way that I approach music writing. I've got a lot of crap, and I've got a lot of good stuff too."

Last December, former MÖTLEY CRÜE singer John Corabi said that he didn't know if the songs he recorded with Mars six years ago will make it to the MÖTLEY CRÜE guitarist's solo LP.

Back in 2016, Mars released snippets of two solo songs, apparently called "Gimme Blood" and "Shake The Cage". The tracks, which were recorded at the aforementioned Blackbird Studio, featured Corabi, who appeared on CRÜE's 1994 self-titled album. Corabi later said that he didn't contribute to the writing process for the two songs, but that he was open to collaborating with Mars on some brand new material.

In August 2021, KORN drummer Ray Luzier confirmed that he is a featured guest on Mars's solo album.