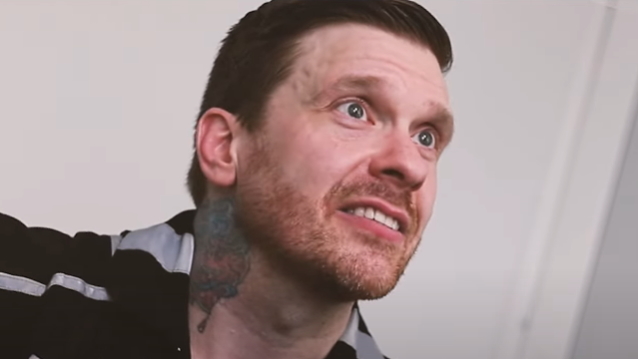 SHINEDOWN Frontman Says He 'Educated Himself' During Early Days Of Pandemic

In a new interview with Riff X's "Metal XS", SHINEDOWN frontman Brent Smith spoke about his mental health during the start of the pandemic and the early days of shutdown orders. He said (as transcribed by BLABBERMOUTH.NET): "When everybody was getting really, really scared during the pandemic, I was getting really, really educated. Because what I did was… First of all, I didn't even know what a pandemic was. I'd never heard of COVID-19. I didn't understand what a coronavirus was. The very first thing I read, though, was that coronavirus is the common cold — the same family. So immediately, I remember reading that and going, 'Well, you're never gonna get rid of this. You have to become immune to it.' And then it got polarized and it got politicized and everything else, because now, I mean, you can look and see — these two and a half years, they have the data of what it did and what it didn't do; you can't really hide it.

"The thing is that you have to educate yourself," he continued. "And with a pandemic, you've gotta remember something: it's not the first virus in human history; it won't be the last. And also, if you would like to know something that I learned by educating myself, all pandemics have one thing in common, and that is they all ended."

SHINEDOWN is currently promoting its latest album, "Planet Zero", which topped all four Billboard rock album charts in its first week of release: Top Hard Rock Albums, Top Rock & Alternative Albums, Top Rock Albums and Top Alternative Albums. The set sold 50,000 equivalent album units, according to Luminate. Of that sum, 43,000 were via album sales. On the all-genre Billboard 200, "Planet Zero" came in at No. 5, marking SHINEDOWN's fifth top five title. It also landed at No. 1 on the all-genre Top Album Sales chart.

"Planet Zero", was released on July 1. The high-concept, viscerally charged album, produced by SHINEDOWN's Eric Bass, takes a hard look at the divisiveness among those of differing ideologies, cancel culture ran rampant, the toxicity of social media, the need for honesty in our public discourse, and the corrosive effects of these things on mental health and humanity.

SHINEDOWN recorded "Planet Zero" during the pandemic, mostly in Bass's newly built Big Animal Studio in his home base of South Carolina.

"Planet Zero"'s six predecessors have sold more than 10 million copies worldwide and all gone gold or better — double platinum in the case of 2008's "The Sound of Madness", according to Billboard.

The next U.S. leg of the "Planet Zero" world tour (produced by Live Nation) begins in Bonner Springs, Kansas on September 3 with special guests JELLY ROLL and John Harvie. The routing also includes festival performances at Louder Than Life on September 23 in Louisville, Kentucky and Aftershock on October 9 in Sacramento, California.

SHINEDOWN recently embarked on a Europe run of festival performances and select shows with IRON MAIDEN.