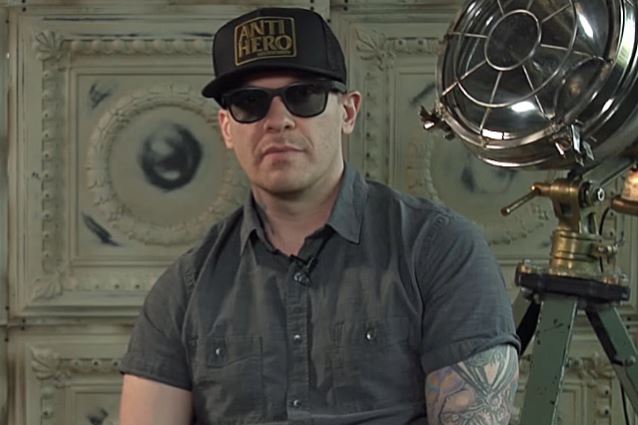 SHINEDOWN frontman Brent Smith was interviewed on the July 25 edition of "Whiplash", the KLOS radio show hosted by Full Metal Jackie. You can now listen to the chat using the widget below.

Asked if there is anything that still surprises him about the music industry after having ben involved in the business for more than two decades, Smith said: "I've gotta be honest with you, there's not a lot that surprises me anymore. I don't really take the calls anymore where somebody gets on the phone with me and says, 'Are you sitting down?' It's not necessary for me anymore."

He continued: "There's always twists and turns, and you've gotta learn how to be as positive as you can be, because the industry can be really, really negative. But I always think about it from the fact of the matter that I'm still the 15-year-old kid in the middle of the audience looking up at the artist that I'm watching, and I'm still just enamored by that. And that's what we really try to do day in and day out — make sure that the audience is one hundred percent taken care of at all times."

Smith added: "I've gotta be honest: next year, we will have been on Atlantic Records for twenty years, and they are — and I'm not just saying this 'cause I've worked with them for a long time — they are the most incredible record label in the world. And that's not lip service; I mean that. Some people might have different opinions about what I just said, just with the industry as a whole, but we've been very fortunate to always be viewed as artists first and foremost when it comes to our record label."

SHINEDOWN's fifth studio album, "Threat To Survival", debuted at No. 6 on The Billboard 200 album chart, selling 65,000 copies in its first week of release.