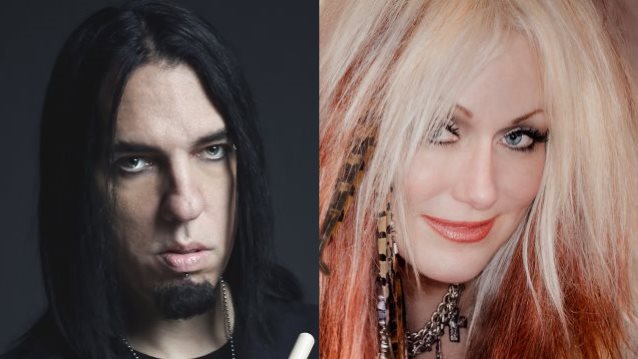 Casey Grillo of KAMELOT has started recording drums for the second metal album from female vocalist Pamela Moore — who is best known for her performance as Sister Mary on QUEENSRŸCHE's 1988 epic release "Operation: Mindcrime" and 2006's sequel "Operation: Mindcrime II".

Grillo states: "I've always wanted to work with Pamela. I have been a huge fan. 'Operation: Mindcrime' was, and still is, one of my favorite recordings of all time. Her most recent release, 'Resurrect Me', made big waves in the metal industry too. So I'm super excited and very humbled to be asked to play, especially by one of my favorite singers."

A collaboration between Moore and Michael Posch, one of Chicago's favorite power metal guitar players who made noise as a founding member of Century Media artists RADAKKA, "Resurrect Me" was released in May 2013 via Rat Pak Records. The effort was described in a press release as "an album written in timeless fashion that explores a creative landscape missed by the music industry."

Regarding how she first became involved with Posch, Moore told RockRevolt: "I approached him to ask him if he would write a few songs with me, mainly because he put together this great musical piece. I really loved what he did and I thought we should try doing this. Everything that he was sending me was great, and there were very few that I didn't end up using. I think we were just feeding off each other, and everything that we came up with was what the other was imagining."

She continued: "['Resurrect Me'] is the album that I have always wanted to do. I've always wanted it to be on the heavier side and show off my vocal range. There's also a lot of room for me to be very creative with melody."