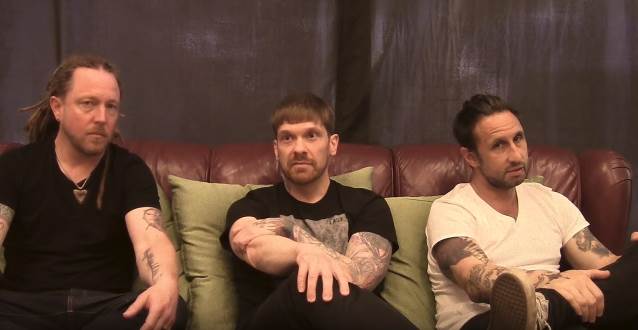 SHINEDOWN Singer: VINNIE PAUL And DIMEBAG 'Gave A Lot To The World'

Barbara Caserta of Linea Rock conducted an interview with SHINEDOWN members Brent Smith (vocals),Barry Kerch (drums) and Eric Bass (bass) on June 26 at the Santeria Social Club in Milan, Italy. You can now watch the chat below.

Asked to comment on the recent passing of Vinnie Paul Abbott, Smith said: "The very first time that we met [Vinnie and his brother Dimebag] both was at a festival in Kansas City. We played early in the day and we had a trailer that had a door in between and two doors on both sides. We didn't know who was gonna be next to us. About 4:30 in the afternoon, 'cause we played really, really early, like at noon, something like that… This is in 2003. And then, all of a sudden, you kind of hear these footsteps and people yelling, the trailer's kind of shaking and doors open and then Mr. Darrell Abbott proceeded to kick the door in between the two of us here, and walked in with Vinnie behind him and said, 'What's your name? Who are you?' And we said 'hello' and this and that, and he was, like, 'I know we just met each other, but there's not gonna be any separation for the rest of the day. At this moment, you might have not known us, and we don't know you, but at this moment in time, we're family. So here's a Black Tooth. Cheers! Knock 'em back, boys!''

He continued: "That's just kind of the way they were. They always just had that very… Everything about rock and roll that you love, that's what they were. All that makes rock and roll not a label and not a genre of music… It's why I say rock and roll is a way of life, and it is. And they embodied that."

Smith added: "I don't think — I know — that there's an incredible jam session going on right now around us — maybe in a different alternate universe. But they gave a lot to not only music but just to — in my opinion, they gave a lot to the world."

SHINEDOWN is continuing to tour in support of its sixth studio album, "Attention Attention", which was released on May 4. The disc is a concept effort which addresses a society both enabled and blinded by technology and the decline and rise of an individual in that society.