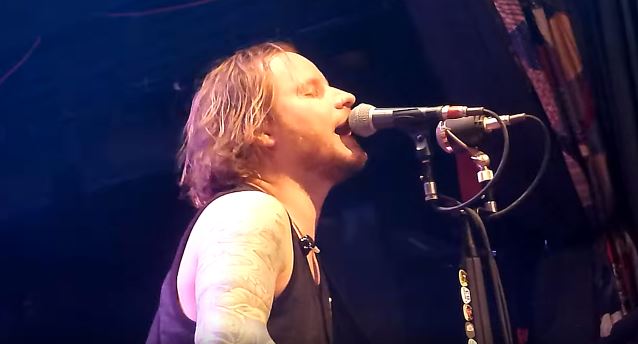 Niclas Müller-Hansen of RockSverige.se recently conducted an interview with SHINEDOWN guitarist Zach Myers. An excerpt from the chat follows below.

RockSverige.se: Where do you see SHINEDOWN ten years from now, with the music industry being what it is?

Zach: I feel like we've gone through a couple of the music changes. I feel like we've already kinda surfed through those waves. It's weird. That question is something I think a lot more about now that I have a child. You have these visions when you're in a band and when you're a father. One of those was always that I want to still be doing this when my kids are old enough to think it's cool. I hope in ten years we're, if not exactly where we are, we're even further. I don't wanna be anything less. I think, even with waves in music, if you like good songs, your fans are gonna stay with you and you'll gain more because maybe they'll teach their kids to like your band or whatever. It's definitely something I think about having a child now. I want my son to be able to come out on tour with me when he's seven or eight. He'll be out with me this summer, but he's only four months old. I definitely want to be still doing what we're doing, because I love what we do.

RockSverige.se: The world has lost Lemmy, David Bowie, Scott Weiland, Jimmy Bain, Prince. Was anyone of those guys a musical hero or someone that inspired you?

Zach: Almost all of them. It was weird that it kinda came in this wave of people. Bowie, that really hurt, as an entertainer. I kinda based a lot of, I think I do, as an entertainer, a lot of what Bowie did. Very much an innovator. Glen Frey hit me more than Bowie. I'm a big EAGLES fan, so that hit me. The Scott Weiland thing was a little bit too close to me. Frey and Bowie are up here. You can't touch those guys. Weiland was a peer. It was someone we played shows with many times. Someone I've met many times, so that's weird. The Prince thing crushed me. That was the biggest blow to everyone in our band. Our intro tonight is Prince. That was like the hardest one. That was kind of a Michael Jackson thing. He was such an innovator and things like that. He had such and influence on a whole generation. Bowie did too, in a different way, but Prince was like… youth… That was everything we do. That one still hurts, man. The Prince thing still hurts today. That's a brutal one, but I think it's just a realization of that we're getting older. When we were kids, we never thought any of these people were ever gonna be gone and now they're gone. It sucks. There are not a lot of people like that anymore and that's the biggest bummer to me. There's not another fucking Prince, man! No one's gonna come out in fucking assless chaps, you know what I mean? And be that badass. You're so badass that you can wear the fucking craziest outfit in the world. There's not a guy that's gonna say, 'Fuck these record labels, I'm gonna be on my own!' Those pioneers of, no pun intended, raging-against-the-machine kinda thing."