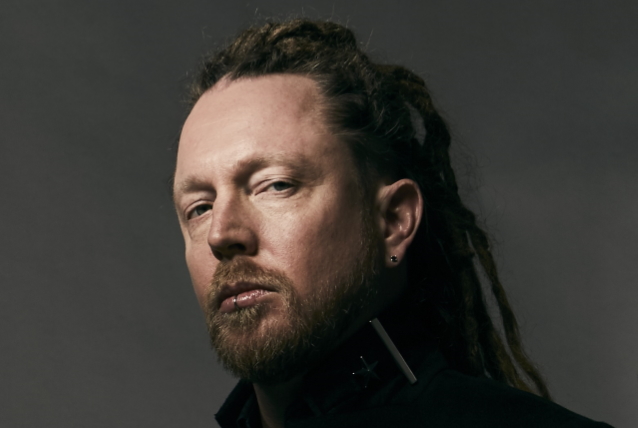 During a recent interview with Kat of the 103 GBF radio station, SHINEDOWN drummer Barry Kerch spoke about the impact that hearing NINE INCH NAILS' "Pretty Hate Machine" had on him the the first time he heard the album.

He said (see video below): "I was in high school when that album came out. I was a metalhead — '80s metalhead — and I wasn't gonna change my ways… This was in '89 or '90 — something like that… A buddy of mine, he was always listening to music — he had his CD player. This was the beginning of CDs. And he says, 'Just listen to this.' And I put it in, and it hit me immediately. I was, like, 'What the hell is this?' It was a game changer. From then on, I became a huge NINE INCH NAILS fan. And for my high school job, I worked at a music store, so when 'The Downward Spiral' came out [in 1994], I was one of the first people that had a promo copy that I was able to take home."

He added: "So, yeah, NINE INCH NAILS was a life-changing moment… It shifted everything… [Trent Reznor] wrote good songs. And he believed what he was saying. You could hear the angst in his voice."

SHINEDOWN is continuing to tour in support of its latest album, "Attention Attention", which came out last year. The follow-up to 2015's "Threat To Survival" marked SHINEDOWN's first full-length effort to be produced entirely by bassist Eric Bass. The 14-song release tells the story of a character who starts out defeated and slowly overcomes pain and personal struggles and becomes confident at the end.

SHINEDOWN's "Get Up" single went to No. 1 on the mainstream rock chart in December and crossed over to the alternative and adult contemporary charts.

SHINEDOWN has had 14 top singles in its 18-year run. That's second most in the mainstream rock chart's history, breaking a tie with VAN HALEN.