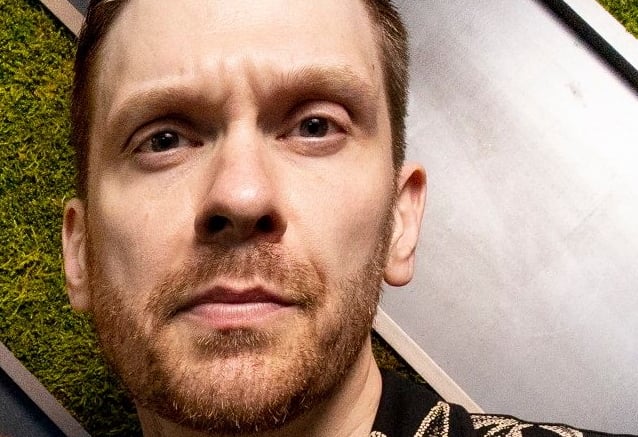 In a new interview with Sean Hood of the FM99 WNOR radio station, SHINEDOWN singer Brent Smith was asked he thinks his teenage son will follow in his footsteps. He responded (as transcribed by BLABBERMOUTH.NET): "Absolutely not. My son could care less that his father is in a rock band — or any band for that matter.

"My son just made the basketball team at school, which he hustled, hustled, hustled all through the pandemic all this year. The kid has got some serious game, I will give it to him, and he's very, very sports-centric.

"Growing up, I always wanted him to pick his path; I want him to go in the direction that he wants to go. And it's really a beautiful thing in a lot of ways, 'cause he's his own dude; he's his own guy. When I'm with him, we don't talk about me; it's all him.

"I've told him this before, and he understands it. I'm, like, 'I can be your friend later. I'm your father. I'm your dad. I'm responsible for you. And I wanna give you encouragement. I wanna set you up with understanding the value of hard work, that your word should be bond, and to be honest and to be a gentleman.' And I have to say he's exhibiting all of those great traits. Because I want him to be a real man. I want him to understand who he is. Later on in life, he may be more interested in it or what have you, but I just try to never make it about me.

"He is very into basketball, very into the NBA, very into being in school," Brent added. "He's 13; he's gonna be 14 in December this year, which is nuts. The other thing, too — I'm not the tallest guy in the world; I'm five [feet] eight [inches tall]. My son is 13 and he's already almost a foot taller than me… It's, like, 'How's it going up there, son?'

"My son is really respectful. It's a very proud moment for me too. He's in middle school, getting ready to go to high school next year. All of his teachers go out of their way to let me know that he's extremely charismatic but he's also not cliquey at all. He is friends with everyone. They're always very open with me about how… His teachers have said, 'He's one of the most empathetic kids here.' It doesn't mean he's a pushover. But people, they gravitate towards him. And that makes me feel good, man, 'cause I always want him to be respectful."

Three years ago, Brent said that his "number one priority in life" was his son. "I think how my success is determined is by how much time I can give to my son," he said at the time. "I keep it very private in the world that he lives in — like teachers at school, people around him, they don't really know what his dad does, because me and his mother, who are really really good friends even though we're not together anymore, have a respect for each other and she knows that I want him to have a childhood. I want him to have an upbringing that is healthy, not only physically and mentally but where he is not pigeonholed into one particular group because of who his dad is. That's my success: making sure he has a childhood, making sure he gets everything he needs for himself, but also making sure he understands that he has to work for it. So, my success is bringing up my son and him being a great man when it's time for him to become one. He's so amazing on so many levels, so I measure my success by him."

More than a decade ago, Smith credited his son, Lyric Santana Smith, with saving his life. "I stopped doing drugs," he said. "I was immensely addicted to cocaine and oxycontin. I was being the clichéd rock star. Cocaine and oxycontin I got hooked on real bad, but my son saved me from my vanity and selfishness. I'm lucky to be alive. I wasn't knocking on death's door; I was in the room doing shots with death."

In January, SHINEDOWN will embark on its 2022 North American tour, "Shinedown Live In Concert". Kicking off in San Francisco on January 26, the upcoming 22-date outing will see the acclaimed quartet travel throughout the West Coast, Canada, and more, with stops in Los Angeles, Phoenix, Denver, Las Vegas, Seattle, Calgary, Toronto, and Montreal. POP EVIL and AYRON JONES will support on select dates.