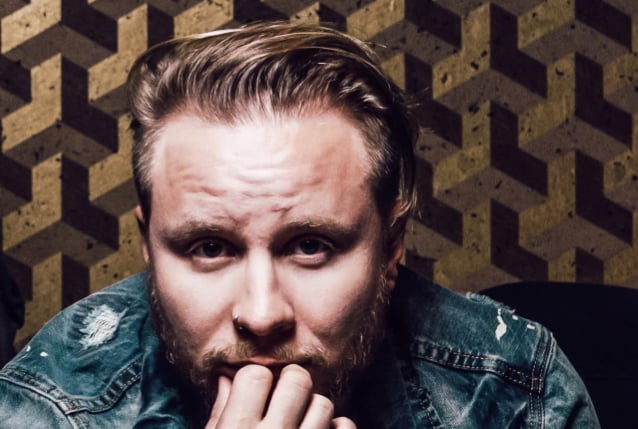 SHINEDOWN's ZACH MYERS On Opening For IRON MAIDEN In Europe: 'No One Gave A F**k Who We Were'

SHINEDOWN guitarist Zach Myers spoke to "The Jasta Show" about the experience for opening for IRON MAIDEN in Europe four years ago. He said (as transcribed by BLABBERMOUTH.NET): "The first night I walked onstage, I was, like, 'This feels like your first show ever, because no one gave a fuck who we were. Nobody. And I mean nobody.

"Bruce [Dickinson, MAIDEN singer] came up to us and was, like, 'Man, I've never seen a band go out there with your fucking balls over your shoulder like that.' 'Cause we didn't change our set. We have some heavy songs, but we 're not a fucking metal band. We're a pop-rock band. We're an Active Rock band. But we didn't change our set. We didn't go out there and play 'Devour' and 'Sound Of Madness' and just do heavy shit; we kind of did the dynamics of what we do. And by the end of the show, man, everyone had their fists in the air. And you know IRON MAIDEN crowds, man. We've done two weeks with METALLICA in Europe, we've toured with KISS, we've done all these things, and there ain't no fans like MAIDEN fans — nobody."

He continued: "We always say, 'Be your own pyro.' In those moments, you can't bring any production with MAIDEN. You're just out there, dude. So you start a song like 'Second Chance', which was a No. 1 Top 40 song, and there's 20,000 people and no one claps. [Laughs] You play that at your show, and the roof comes off the place. You play with IRON MAIDEN, and they're, like, 'Hey, motherfucker, when is IRON MAIDEN going on?'"

Two years ago, SHINEDOWN frontman Brent Smith told Music Choice that opening for MAIDEN at more than 40 shows in Europe was a "life-changing" experience. Zach added: "Just to tour at that level… You know, we're not a metal band. They're the most famous metal band of all time. So to go out in front of that crowd — I don't know; they almost gave us a lesson about how to earn it when everybody's not already on your side… It was such an amazing thing that they did in bringing us over there to open for a band that owns that country. We've toured with KISS; we did, like, eight shows with METALLICA in Europe one time, at festivals and stuff. The IRON MAIDEN fans, though, they take their holiday, they take a month off and just travel and go to every show. And they aren't getting in for free — they have to buy a train ticket to every show, they have to buy a [concert] ticket and to find a place to sleep. That's thousands and thousands of dollars to spend on a band.

"We met people in line that were, like, 'We've seen everybody open for this band," Myers continued. "We thought you guys were the classiest and the best opener we've ever seen,' which made us feel great. These people [are] two hundred and something shows in with the band. That is commitment. We've had somebody about a hundred and thirty something shows in, which is insane to me. We have a lot of lifers, which we're very blessed with."

Earlier this year, Smith revealed that SHINEDOWN was in Malibu, California working with Grammy Award-nominated multi-platinum songwriter and record producer Dave Bassett on material for the band's upcoming album. The follow-up to 2018's "Attention Attention" is being recorded in part at bassist and producer Eric Bass's new studio in Charleston, South Carolina for a tentative late 2021 release.