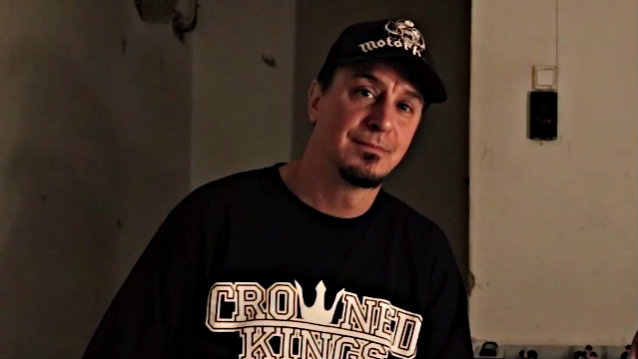 SICK OF IT ALL Frontman Weighs In On U.S. Presidential Election: 'TRUMP Is There To Make HILLARY Look Good'

SICK OF IT ALL singer Lou Koller has weighed in on the 2016 presidential election, saying that Hillary Clinton will be the next president of the United States "because they want her to be."

The frontman, whose lyrics often revolve around politics, social injustices and life on streets in New York, made his comments on Thursday, October 27 before SICK OF IT ALL's concert in Malmö, Sweden. He told Access: Rock: "I don't know if I'm more cynical now, but the second Donald Trump announced his candidacy, I just looked at the screen and I turned to my wife and I said, 'He's there to make Hillary look good.' Because I'm not deeply into politics, but I follow it enough to know that Donald Trump, for decades, has been friends with the Clintons, he's donated millions to the Clinton Foundation. And I'm just sitting there watching his speech, and when he started saying all those things, like, 'Mexico is sending their rapists. They're sending this,' I was, like, 'He's saying outrageous shit so everybody hates him and wants to vote for Hillary.' And when we saw the way they railroaded Bernie Sanders off the ticket… Even the Democratic National Convention committee has been caught doing fraudulent things, changing voter results… And that's the funny thing — they caught these people doing it, it's all out in the open, but she's still the candidate, even though it should have been, 'Okay, let's recount everything or redo the whole vote.' But no, it's all planned — she's gonna be president, no matter what."

He continued: "If Trump wins, which would be fucking crazy, then I'm proved wrong. But as far as I'm concerned, and everybody I know, it's, like, yeah, she's gonna be president because they want her to be. That's why they got rid of… They would show rallies on TV, Trump and her, in the beginning, and there would be, like, Trump has three thousand people, and Hillary is currently speaking in front of, like, five hundred to seven hundred people. Bernie Sanders would sell out stadiums — stadiums of people chanting — 'cause he was for the people. But he did say if he lost, he would endorse whoever was the winner, and he endorsed her, which made me mad; I think he shouldn't have. But we'll see."

Lou added: "The good thing is, no matter who wins, if we get Bernie Sanders into the head of the Senate, he'll change… A lot of people I know, they only vote in a presidential election; they don't vote… In two years, there'll be another elections for senators and local [officials]; that's where you have to vote, that's where you should be voting, because those are the people that are gonna fight for your rights in there. But nobody ever does.

"As far as I'm concerned, the election is already said and done; she'll probably win. The only reason Trump could win, or should win, would be to fuck the whole system up. But then, once he's in there, he's just gonna fuck the world up. You see these people that he has around him saying, 'What's the point of having nuclear weapons if you're not gonna use them?' And I go, what do you think? You live in a world where you press a button and a shield comes up and protects us? No, we'll all die, you fucking idiots."

SICK OF IT ALL will celebrate its thirtieth anniversary by releasing "When The Smoke Clears" on November 4 via Century Media Records. The effort includes five brand new tracks as well as rare photos and iconic shots from their past and present. Everything was compiled for a strictly limited, luxurious 60-page coffee table artbook that is wrapped in fake leather and comes with personal liner notes from such peers as Davey Havok (AFI),Dennis Lyxzén (REFUSED),Chuck Ragan (HOT WATER MUSIC),Arthur Smilios (GORILLA BISCUITS) and Matt Kelly (DROPKICK MURPHYS).