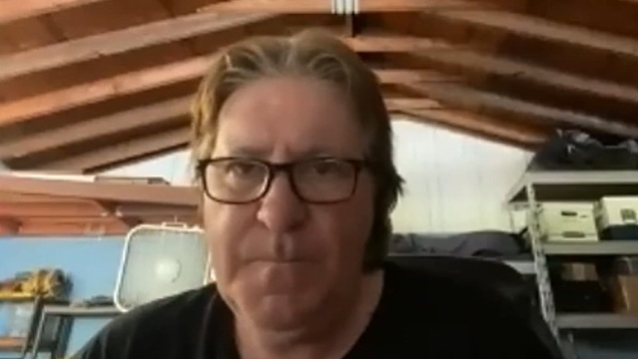 Simon Wright says that young Ronnie James Dio fans were very appreciative of DIO DISCIPLES' decision to go on the road with a hologram of the legendary heavy metal singer.

Dio died in 2010 at the age of 67 from stomach cancer. His hologram was created by a company called Eyellusion and made its debut at the Wacken Open Air festival in August 2016 in front of more than 75,000 fans.

The "Dio Returns: The World Tour" production, which launched in 2017, featured audio of Ronnie's live performances from throughout his career, with the DIO DISCIPLES band playing live, consisting of Craig Goldy on guitar, Wright on drums and Scott Warren on keyboards, along with Bjorn Englen on bass. Also appearing with them are singers Tim "Ripper" Owens (JUDAS PRIEST, ICED EARTH) and LYNCH MOB's Oni Logan.

Speaking to the "Everblack" podcast, Wright said about his continuing efforts to keep the Ronnie James Dio legacy alive (as transcribed by BLABBERMOUTH.NET): "The band we had, DIO DISCIPLES, we kind of shifted away from that and we were doing a project called 'Dio Returns', which was an actual hologram of Ronnie. And we did a pretty good tour of the U.S. in 2019. And it was great, because you get a real cross-match of people — you get the older generation and then the younger and then even young, young kids who never got a chance to see Ronnie. So they were very appreciative and thanked us a lot for bringing that kind of show out on the road, 'cause they didn't get a chance to see Ronnie. So it just makes everything worthwhile, when you're speaking to people like that who are so excited about things. It was great."

Asked if it was emotional for him to perform along to Ronnie's vocal tracks, Wright said: "Yeah, it was… When you're doing the show, you've gotta do the business. And this show was much different to what I'd been playing other shows before that, because I had to play along to a click track for that show — wear these headphones; I don't like in-ears, so I wore headphones. So I had to really sit back and concentrate, because the click was… ran to Ronnie's voice, which was taken from different parts of his career and time. There were a couple of ebbs and flows, so you had to really lock in with it. But you got to learn it after a while. It was after the shows, when you meet the people, like I said earlier; they were so grateful that you came along and you did a show like that."

Simon also confirmed that there are plans for the same musicians to return to the road in 2023 and play more Dio tribute shows, albeit this time without the hologram.

"I'm not sure what it's gonna be called — it might be 'Dio Returns' again — with the LED screens," he said. "And there's also some 3D imaging that's been brought in. And I've seen a bit of it, and it's freakin' amazing. So it should be quite a show. And we'll probably have two singers again singing. So that will probably be next year."

Two months ago, Ronnie James Dio's former wife and longtime manager Wendy Dio told the "The Rockman Power Hour" online show that the Ronnie hologram was "an experiment that we did. It was 50/50 — some people hated it; some people loved it. It was something we did. I don't wanna do it again. This time now I'm gonna do real Ronnie. I've got all this video footage from RAINBOW and some [BLACK] SABBATH and DIO and even some ELF stuff, and I wanna put that together with a live band and take that out. 'Cause I think that'll be something that kids will really wanna see — stuff that they've never seen before as well."

Wendy previously discussed the status of the Ronnie James Dio hologram during a September 2021 appearance on an episode of the "Hangin' & Bangin': Artists On Lockdown" online show. Speaking about how her reaction to the hologram evolved over the years, she said: "When I first saw it, I cried. Then I got used to it because it wasn't Ronnie. And then we took it out [on tour]. The first [version] was not that good. The second one was a lot better. But I decided that I don't wanna do it anymore; I decided I want real Ronnie. So we're working on a stage with the DIO band. Instead of having a hologram, it will have film of Ronnie with the live band playing and with special effects and everything else. So that's what we're working on. We're working on it with Paul Dexter [who was Ronnie's lighting designer and stage designer for years] and a bunch of other people. And also the Eyellusion people, who did do the hologram, are doing a bunch of special effects for us with it."