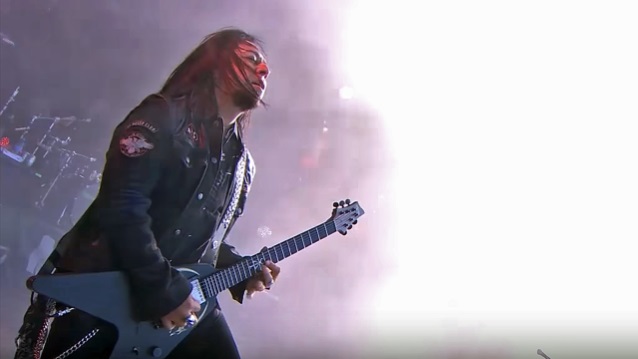 Jay Nanda of Alamo True Metal conducted an interview with members of industrial metal pioneers MINISTRY prior to the band's November 12 show at the Aztec Theatre in San Antonio, Texas. You can watch the entire chat below. A few excerpts follow (transcribed by BLABBERMOUTH.NET).

Sin Quirin (guitar): "It's been done for several months. It was originally supposed to be out in October, but we recently signed to Nuclear Blast, and so now it's been pushed to first week of March. We're playing a couple of songs tonight off the new record. We're playing 'Antifa', which is going to be the first single off the record and we're playing a song called 'Wargasm' as well."

Cesar Soto (guitar): "For me, it's pretty mind-blowing just to be on the stage with these dudes. It's a really tight unit. You'll be able to see tonight how tight the band has gotten. It's pretty mind-blowing; it's fucking awesome. What else can I say? Aside from being able to play with the best musicians you could possibly play with and come together as a unit and deliver every night, really, that's rewarding for me."

Tony Campos (bass, FEAR FACTORY, ex-STATIC-X): "Back in the STATIC days, the two bands we ripped off the most was MINISTRY and PRONG. To get to play in both of those bands is really cool. To get invited back and to do this again is really special. Just jamming with these guys, to get to do it again, is really fucking cool."

Sin: "It's funny because Tony and I go way back to the early Hollywood, L.A. scene where we were just local musicians before anybody had a record deal. We used to go to each other's shows and play with each other's bands. It would literally be like five people, counting the band members, watching each other play. This was the early '90s. The early-to-mid-'90s when we first started in the scene together. It's a trip to now be here and play with a band we both looked up to. Just being able to do this, it's still a trip."

On the challenges playing in MINISTRY provides:

John Bechdel (keyboards): "It is a real challenge. I've been doing live samples since the mid-'80s with bands. MINISTRY was the first time we had actually used a metronome or a click because all of the songs have these long samples that are timed out specifically, so if you're playing it at the wrong tempo, they won't line up. That was the first challenge. I started in '06 on the 'Rio Grande [Blood]' tour with [drummer] Joey Jordison [ex-SLIPKNOT]. He and I quickly had to learn how to work together and work with the click. That was a big challenge, learning all of the material all at once. I go back to being a MINISTRY fan. Like a lot of us, I heard 'I'm Falling' on the radio in 1983 and I bought the twelve-inch single which I still have. I met MINISTRY back in '91 when I was with KILLING JOKE and I got to know most of the guys. I met Al and I didn't get to know him too good until I joined the band. Working with him, I realized how much we had in common with our influences from the early '80s electronic music scene. We had to go through all the old MINISTRY archives, they were transferring all the original masters over in Pro Tools. It was a one-time process where the tape was destroyed in the process and being a part of that, also REVCO [REVOLTING COCKS] was on that '06 tour and I got to know those guys. We were digging through old boxes of DAT tapes and zip drives, just trying to find everything we could to make this all happen. It was a big undertaking."

On Jourgensen's decision to continue touring and making new albums with MINISTRY despite saying there would be no further albums after the death of longtime guitarist Mike Scaccia in 2012:

Sin: "After the last tour last year is when he was talking about wanting to do another record. The process, it changes from record to record. Sometimes we show up with ideas already kind of formed, but for this record, it was a lot of writing on the spot. He was pretty open to just different ideas. He didn't really have any 'Okay, I want it to be like this. I want it to be like that.' We definitely brought slower ideas, if that makes any sense, as opposed to just playing a thousand miles an hour like some of our early records. It was a bit more experimental and we brought different instruments into this record that I don't think people will be expecting to hear from us. It's definitely stuff that I don't think people are going to be expecting from a MINISTRY record, but it was pretty organic in that sense that we would show up and bring ideas and start tracking and see what we ended up with at the end of the day. We brought a couple of ideas that were in very basic forms and then just jumped from there. It was something that we might have worked on months earlier. It starts off one way and then by the time you're done with the song, it's completely different, but it started from an initial idea. That was the way we went about doing this record. It wasn't, 'Okay, I want you to write like this. I want you to write like that.' It was, 'Let's see what you got. Bring what you have to the table.' It was pretty cool. For me, it was really cool that we got so many people involved in this album. Other times, it would be just a couple of people that were doing things in the studio. For this, Cesar is on it, JB [John Bechdel] is on it, I'm on it, Al's over it. JB was saying there's a bunch of different things and other guest people that are on it as well. For me, Tony's on it as well, it felt more like a band effort, which was really cool."