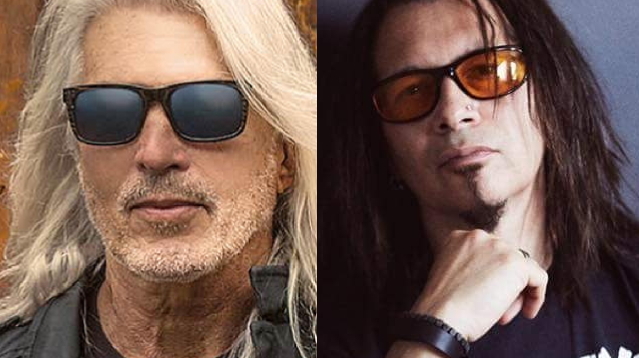 Singer RAY WEST On His Short-Lived Collaboration With GEORGE LYNCH: 'I Gave' It 'A Shot And It Didn't Work Out'

Singer Ray West (SPREAD EAGLE) says that his collaboration with George Lynch in GEORGE LYNCH AND THE ELECTRIC FREEDOM "didn't work out."

West played two shows with the former DOKKEN guitarist — on July 8 in Saginaw, Michigan and on July 9 in in Woodhaven, Michigan — before the 67-year-old axeman pulled the plug on the pairing, saying West was "not really ready" to take on the gig.

West discussed his short-lived stint as the GEORGE LYNCH AND THE ELECTRIC FREEDOM frontman during a July 13 interview with Meltdown of Detroit's WRIF radio station. Saying that he had "no rehearsals" with the rest of the band prior to the Saginaw gig, Ray explained that "never really studied" the songs he was expected to perform with George. "I mean, I know [the LYNCH MOB] 'Wicked Sensation' [album] from listening to it a few times, but I'd never attacked the songs before, hadn't dissected and learned them — none of that," he said (as transcribed by BLABBERMOUTH.NET). "So it was a bit of a challenge, and as you can see, as it turned out for me, a very big challenge, because, look, for me to do a gig and be solid and live through it and come out with flying colors, I've gotta have those tunes in my DNA. And it just didn't happen — it just didn't happen for me. I was weak. All the things that I thought I could do without that much work… I've gotta rehearse. I'm not a cover guy. I can't just go in and have that sort of thing happen for me. I wish I could say I was that cover guy 'cause I could make it work anywhere. And it's not that the lyrics choke me.

Asked if he knew after the Woodhaven gig that it would likely turn out to be his last show with GEORGE LYNCH AND THE ELECTRIC FREEDOM, West said: "In this business, you kind of read people. Even if you're not that chatty with each other, you can feel if somebody's got a vibe toward you. When I went to bed that night, I was, like, 'Man, I'm gonna have a weird Sunday.' And I wound up having a really weird Sunday. You're on the plane [flying home] and you're just not sure. Then finally [George and I] chatted and [it was], like, yeah, that's the way it is."

According to West, he and George spoke about his status in GEORGE LYNCH AND THE ELECTRIC FREEDOM on Monday, July 11, two days after the Woodhaven show. "He called me. He was, like, 'Bro, I know you gave it a really great shot. But, obviously, you weren't really ready to do this,'" Ray recalled. "And maybe he was right. Because for me, honestly, I'm only ready if I get to rehearse. That's the way I've always done it."

West went on to say that he understands why Lynch chose to replace him so quickly instead of allowing him time to grow into his role.

"Look, he's looking to do these gigs and land 'em," Ray said. "It's George Lynch, man. So if you're not out there and you can match that kind of skill and that excellence, then you don't deserve to be there… I'm sure if I had a few shows down the line, I would get stronger and I'd fit myself in better — I'd sing the notes my way and I'd find my way around a little easier. Technique comes into play. It's about technique, and if you can't reach your head voice and you don't know where the switch is in this particular song, it's gonna get a little weird for you. When I first started out, I had a high head voice, a rasp, and I'm still working towards gaining that to its fullest potential. It's just not enough time for me to just sort of melt in and fit; it has to be great right there. That's how these things work. 'Cause there's a lot of money involved too. Guys are getting paid, and nobody wants to half-ass it."

West didn't completely rule out working with Lynch again in the future, saying: "I told him, down the line if I work on the tunes and have them into my DNA that I would like to come around. But sometimes it is what it is, man. I gave something a shot and it didn't work out."

Last month, before he and West played together, Lynch was full of praise for the singer, telling VWMusic: "Ray, he is just a great fit for the band…I mean, I probably couldn't have designed a better fit in a laboratory." At the time, George said that couldn't "think of any weak spots" with West, adding that Ray was "gonna bring some new life into our whole little world here."

After video of GEORGE LYNCH AND THE ELECTRIC FREEDOM's show in Woodhaven was posted online, several fans were critical of West's performance, with one person writing on YouTube, "The vocal sounds best on [the instrumental song] 'Mr. Scary'", and another person chiming in: "I can't get into this singer. Awful." A third person wrote: "What happened to Ray West? He's great in the studio but I guess not when he's live. This is sad." A fourth fan added: "kinda bummed on this gig, had high hopes for Ray, maybe once they find their groove things will fall into place. Right now it doesn't seem too natural, kinda awkward." Bracht also weighed in on the discussion, writing simply "hold my beer" in a comment that was posted on July 13, two days before his own live debut with GEORGE LYNCH AND THE ELECTRIC FREEDOM.

Not everybody panned Ray's delivery at his second concert with GEORGE LYNCH AND THE ELECTRIC FREEDOM, with one fan writing: "Ray West is Amazing singer….Give him a chance." Another person chimed in: "Ray has a style of singing that fits perfectly. Would have loved to see this."

GEORGE LYNCH AND THE ELECTRIC FREEDOM performed yesterday (Friday, July 15) in St. Peters, Missouri with another short-notice replacement singer, a Seattle-based musician named Travis Bracht (BRUISER BRODY, SECOND COMING). Also joining the legendary DOKKEN axeman at the gig were his longtime drummer Jimmy D'Anda (BULLETBOYS) along with TANTRIC bassist Jaron Gulino, who was filling in for Rob DeLuca (Sebastian Bach, UFO, SPREAD EAGLE). A local musician also got up on stage and sang DOKKEN's "It's Not Love" with George, Jimmy and Jaron.

Gulino took to his personal Facebook page on Friday to write that he and Bracht would be performing with GEORGE LYNCH AND THE ELECTRIC FREEDOM again today (Saturday, July 16) in Plymouth, Indiana.

Singer Oni Logan first hooked up with LYNCH MOB in 1990, but exited the group after the release of its first album, only to rejoin the outfit in the late 2000s.