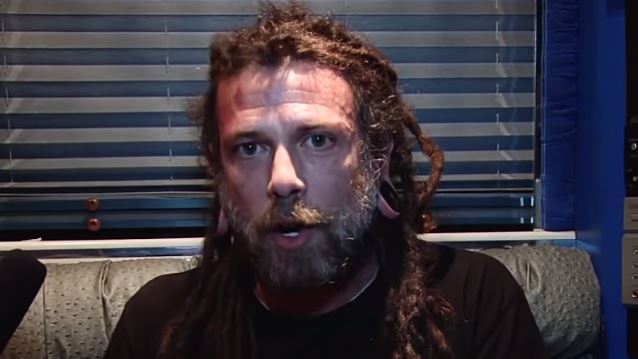 Former CANNIBAL CORPSE and current SIX FEET UNDER frontman Chris Barnes was interviewed on a recent edition of the "Metal Shop" radio show, which airs every Saturday night from 10 p.m. to 2 a.m. on the Seattle station KISW 99.9 FM. You can now listen to the chat using the audio player below.

Asked how much of a role Washington state's legalization of marijuana in 2012 played in his decision to relocate to Seattle, Barnes said: "Well, it was a big part of it, man, because I felt like for a big portion of my life, over half of my life, I was saying publicly and to myself, if there was ever a place that had legal weed that I loved and would wanna live there, why wouldn't I be there? And I asked myself that question a couple of more times, and sold my house [in Florida] in two days, packed up the house and left within two weeks and got up here."

He continued: "I've just been digging it up here for years. My mom lived up here in the '70s, and I just heard all these cool stories. And when I started touring, coming up here, I always felt comfortable up here."

Barnes also recalled how he was first introduced to marijuana at a very young age.

"I was lucky to grow up in a house where my dad and his wife were very, kind of, progressive, and he grew cannabis and sold it," Chris said. "So I remember the original Acapulco Gold strains, and Panama Red, the real Red, that were eradicated… So, yeah, my first time I smoked it, I think I was 12 years old, so it was probably, like, '78 or something, '79. I stole a roach [the end of a marijuana joint] out of the ash tray, and me and my best friend took my mini bike and went trail riding and smoked a couple of roaches."

Asked who the other biggest stoner in death metal is, Barnes responded: "It used to be my good friend Chuck Schuldiner [from DEATH]. He was a great smoking friend. But now I'd say my good friend Landphil Hall from CANNABIS CORPSE."

SIX FEET UNDER will release its eleventh studio recording on May 5 via Metal Blade Records. Titled "Crypt Of The Devil", the ten-track slab of audio violence was composed by vocalist Chris Barnes and CANNABIS CORPSE bassist/vocalist Phil "Landphil" Hall. While on tour with CANNABIS CORPSE in 2013, Barnes and Hall met and kept in touch. Barnes would later lend his vocals to a track on CANNABIS CORPSE's "From Wisdom To Baked". That same year, Hall and Barnes joined forces to pen brand new SIX FEET UNDER tracks. Barnes lauds Hall's take on the SIX FEET UNDER style of death metal and stated that this material was, "where my wheelhouse is — it's where I thrive vocally and lyrically."