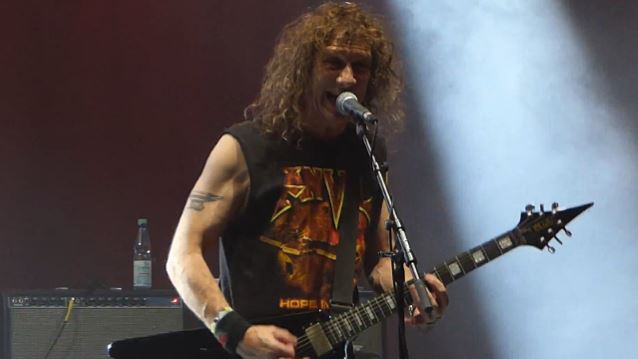 LIPS On ANVIL's Early Days: 'We Were Trying To Do Something That No One Else Did Or Tried'

Greg Prato of Songfacts recently conducted an interview with guitarist/vocalist Steve "Lips" Kudlow of Canadian metal legends ANVIL. A couple of excerpts from the chat follow below.

Songfacts: How do you rate ANVIL among the leading contributors to what became known as thrash metal?

Lips: I don't know whether I'm in a position to say anything about that. That's for others to make those judgment calls.

Songfacts: I think ANVIL was definitely one of the first bands that you could say trailblazed that style of music.

Lips: Yeah, and it's weird, because we didn't look at it as that's what we were doing. All that we were trying to do when we did that was be unique and do something that no one else did or tried. It really is as simple as that. You're not thinking, "Oh, yeah, everybody's going to copy this." You don't start thinking that way. That's pretty, I would say, arrogant.

Songfacts: Looking back at the '80s, I always find it interesting that some bands tried to stay current, tried to follow the trends a bit. You look at a band like KISS, they suddenly started sounding a bit like BON JOVI and those types of bands. And as far as fashion goes, they were also dressing similar. It's interesting how certain bands did that, and then there are other bands, like I guess you could say MOTÖRHEAD, that did.

Lips: That's right. Absolutely. And it put a big divide in it and a big explosion of genres and sub genres.

Songfacts: Would you say ANVIL was caught in the middle there between those two?

Lips: That's right. Because our first albums had aspects of all of those things. It's just that it all fragmented, and it was no longer cool to have aspects of all different things. It was either you're this or you're that, and it was about labeling and dividing and separating. It went through an era of that. But we survived it all, because we basically and fundamentally stuck to our guns and did it the way we wanted to, how we wanted to do it, when we wanted to do it, and didn't really care about how we were labeled or not labeled. Longevity and history speaks for itself.

Songfacts: That's interesting, I've never really thought of it that way. But if I think back to the '80s it seems like that was maybe like suddenly with metal, there were all these different sub genres and categories and things like that.

Lips: And look at where it is today, completely fragmented. How do you know what to listen to? What is good? You've got to start asking yourself, "What do I even like anymore?" All the things you did like you don't like anymore. So then what is new to like? A lot of people are asking themselves that. Having said that, there's lots of things to like. It has to do with the listener's preferences and how open-minded you are or how close-minded you are. And that's what it all comes down to.