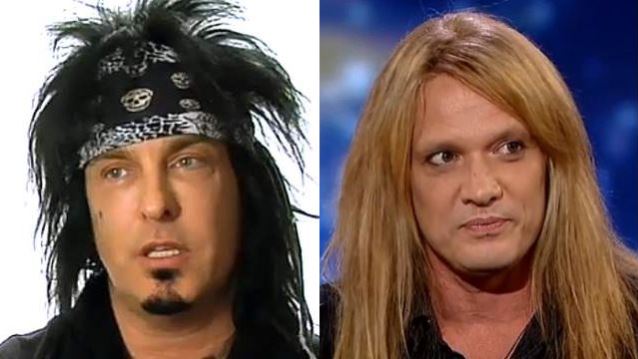 MÖTLEY CRÜE bassist Nikki Sixx has dismissed as "absolutely not true" Sebastian Bach's claim that the former SKID ROW singer was once asked to replace Vince Neil in MÖTLEY CRÜE.

Neil was fired from MÖTLEY CRÜE in 1992 due to personal differences and was replaced by John Corabi. With Corabi on vocals, MÖTLEY CRÜE released one critically acclaimed full-length CD, which ended up being a commercial failure in the wake of grunge despite a Top-Ten placing on the album chart.

Asked by a fan on Twitter if he was ever considered to replace Vince in MÖTLEY CRÜE, Bach replied that he was not just "considered" but that he was actually "asked" by CRÜE if he wanted to join the band as its new lead singer. He then added that the story of how close he came to becoming a member of MÖTLEY CRÜE might be included in his upcoming autobiography, which he is currently working on and for which he recently revealed that he had "a big offer from a big book company."

When another fan pressed Bach on why the singer turned down the offer to join MÖTLEY CRÜE, Bach replied: "The short answer is that I actually thought at the time this band SKID ROW was better." Sebastian then added, "Gee, I sure know how to pick 'em."

Speaking on a recent edition of his "Sixx Sense" radio show, Sixx addressed Bach's comments, telling his listeners (hear audio below): "I read something online. It's not true, and I wanna talk about it a little bit.

"Sebastian Bach, who was the lead singer from SKID ROW — and I still think he should still be in SKID ROW, and I've talked to all of them about that many times; they just can't along — he says that MÖTLEY CRÜE wanted him to replace Vince Neil. And I'm just gonna say right now that is absolutely not true.

Asked by his "Sixx Sense" co-host Kerri Kasem if it's possible that one of the other members of MÖTLEY CRÜE may have drunkenly told Bach at a bar somewhere that Sebastian "should be" the new lead singer of MÖTLEY CRÜE, Sixx replied: "We were all sober at the time. That was part of the problem — that Vince wasn't sober and we all were. And that's kind of part of what the big blowup [with Vince] was all about.

"In the end, we should have worked through our differences — MÖTLEY CRÜE should have, with Vince, and been where we are today — but we didn't. We were young, and we didn't have managers at the time who were strong enough to say, 'Hey, guys, this is the wrong thing to do.' But Sebastian Bach was never part of this master plan, that's for sure. So I want people to know that."