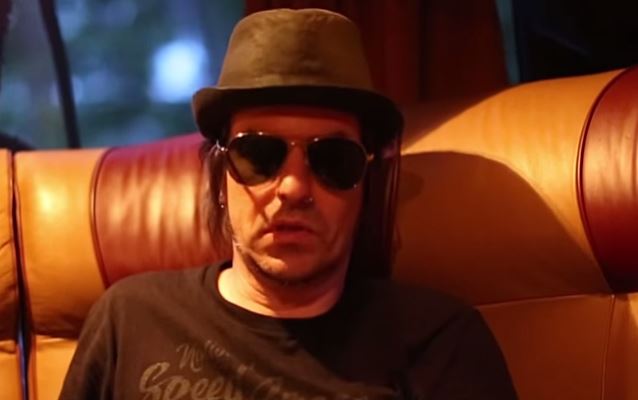 SKID ROW Bassist On RAMONES: 'I'd Like To Think That They're Somewhere Making Noise Together Again'

Asked about the RAMONES classic "Psycho Therapy", which was covered by SKID ROW on the band's "B-Side Ourselves" EP in 1992, Bolan said: "I come from a punk-rock background. Living in New Jersey, RAMONES were never the biggest band in the world, but in New York and New Jersey, they were the biggest band to a lot of people. And they were the band that, basically, to all their fans said, 'It's cool to be weird. You can be weird if you want, because it's you, and that's who you are.'"

He continued: "I've probably seen the RAMONES more than I've seen any other band. And I, eventually, over time, became friends with those guys, would see them around. Joey and I would talk a few times a year.

"When I lived in New Jersey, he'd play this venue down the street from my house, and he'd always call, and he'd say, 'You're on the guest list. If you're not in town, let me know if any of your friends wanna come down.' He was an amazingly sweet guy. And when he knew I wasn't in town, he would dedicate 'Psycho Therapy' to me. So when we recorded that, we actually had him in the video for it. And he had told me that they were in a van going to a tour rehearsal, and he played it for the guys. And all we thought was, 'The RAMONES are listening to us on their way to a rehearsal, jamming out to us covering one of their songs. Not a SKID ROW song, one of their songs, and they're rocking out in the van.' He said that everyone loved it. He signed a poster, 'Great fucking version,' and I still have it to this day."

Bolan added: "When I heard about Tommy [dying], I was pretty sad about it. I didn't know Tommy. We knew Johnny, Joey and C.J. And we knew Dee Dee a little bit. But, yeah, I'd just like to think that they're somewhere making noise together again."

"Rise Of The Damnation Army - United World Rebellion: Chapter Two", the latest EP from the current lineup of SKID ROW — Johnny Solinger (vocals),Scotti Hill (guitar),Rachel Bolan (bass),Dave "Snake" Sabo (guitar) and Rob Hammersmith (drums) — sold around 1,300 copies in the United States in its first week of release. The CD, which came out on August 5 via Megaforce Records, contains covers of QUEEN and AEROSMITH classics as bonus tracks.