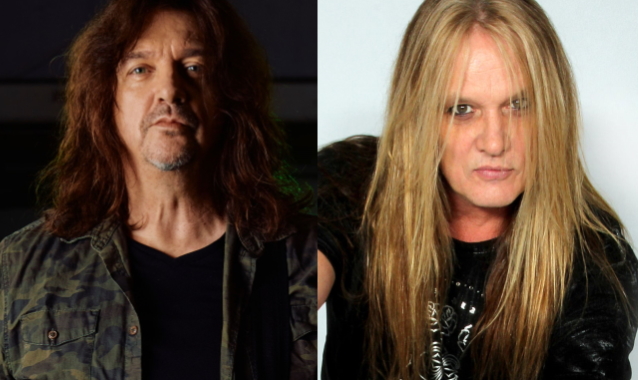 In a new interview with Pushing The Limits, SKID ROW guitarist Dave "Snake" Sabo was asked if he still has a relationship with the band's former singer, Sebastian Bach. He responded: "Not at all. None. We've all moved on. It was an awful long time ago; we're talking 23 years ago [that SKID ROW reformed without Sebastian], so that's an awful long time ago. [Laughs]"

Pressed about whether he ever sees a day down the road when he is able to make amends with Sebastian and they are able to have a conversation again, Snake said: "You know what? I don't know. I've gotta be honest — it's not something that I think about. Truly, it's not something that I think about. My mind is always in the present and the here and now. And I'm thankful for everything that we've created — all the collective people who've been a part of SKID ROW — that we've all created since the very beginning up until now.

"The only thing that I can have any sort of part of or control over is the right now, and it's the band that it is now," he continued. "And we have a new record coming out, 'The Gang's All Here'. And I think we've made some really, really great music. I hope people feel the same way.

SKID ROW fired Solinger over the phone in April 2015, a few hours before announcing ex-TNT vocalist Tony Harnell as his replacement. Eight months later, Harnell exited the band and was replaced by South African-born, British-based singer ZP Theart, who previously fronted DRAGONFORCE, TANK and I AM I. Theart was fired from SKID ROW in February and was replaced by Erik Grönwall, who was previously a member of the Swedish hard rock band H.E.A.T.

This past March, Sabo was asked by Scott Penfold of Loaded Radio how he feels about people still calling for a reunion with Bach. He said: "Well, it's been 23 years [since SKID ROW reformed], so to say that I'm over it would be an understatement. We attempted [a reunion] slightly [back in 2016]. We dipped our toes in the water and realized that it didn't feel so good. It's just one of those things where we still could not see eye to eye; we couldn't even get past the point of simple texting.