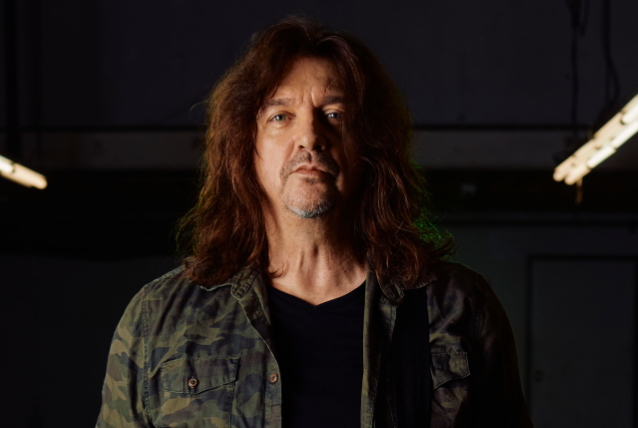 SKID ROW Guitarist: 'People Realize, Maybe More So Now Than Ever, How Much Of A Role Music Plays In Our Everyday Lives'

SKID ROW guitarist Dave "Snake" Sabo spoke to Andertons Music Co about how he has been using the coronavirus downtime to stay creative. He said (as transcribed by BLABBERMOUTH.NET): "Rachel [Bolan, SKID ROW bassist] and I work best when we're in a room together. It's all we've ever done; we've always done it in a room together. So we've done a couple of things over Zoom, and a couple of good things have come out of it. But it's just so foreign — it's foreign to everybody. You just make the most with what you have. And so we'll continue to do more, just to be creative and productive.

"I've gotta tell you, man — we played our last show last March, and it's heartbreaking; it's really, really heartbreaking. Not just from the musician side of me, but from the fan side of me. I miss going down the street to see a show. I miss the communal aspect of it. I miss seeing other people thrive in their environment.

"This is a terrible thing that's going," he continued. "And I know that we're getting to a place where we're getting safer and safer. But it's gonna be a while — it's gonna be a while before people have the trust. Not in all areas, because there's people out there now that are just going buck wild. And I don't know how much that is helping things. I wish people would just wear a mask and let's get done with this thing already. I'm not a political person; I don't understand the politics of that whatsoever. For me, I wear a mask wherever I go. The last thing I want is to spread anything or infect my children or my family in any way.

"But the good thing, for me, is that, at least from my viewpoint, I do see light at the end of the tunnel," Sabo added. "I think people realize, maybe more so now than ever, how much of a role music plays in our everyday lives. It was becoming background noise for a little while, it felt like. And I don't think that's the case anymore. I think music's being consumed on such a larger level now."

This past weekend, SKID ROW regrouped in Nashville, Tennessee to begin pre-production on some of its new material. The band is working with Grammy Award-winning producer Nick Raskulinecz (FOO FIGHTERS, DEFTONES, MASTODON, RUSH) after previously collaborating several times with Michael Wagener, who also helmed the group's 1989 self-titled debut and 1991's "Slave To The Grind".