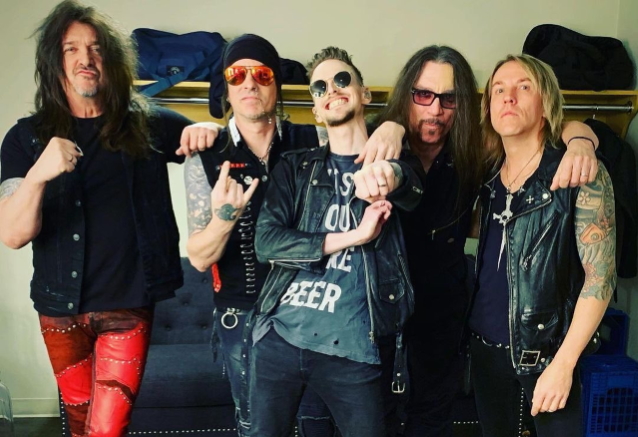 Grönwall recently joined SKID ROW as the replacement for ZP Theart, a former member of DRAGONFORCE, who hooked up with SKID ROW in 2016 following the departure of Tony Harnell (TNT, STARBREAKER).

Regarding how Erik came to join SKID ROW, Rachel said (as transcribed by BLABBERMOUTH.NET): "We toured together. H.E.A.T. was on tour with SKID ROW. What year was that? '18? And we'd hear him every night from the dressing room. And a couple of times, I was, like, 'Man, listen to this guy sing. He's phenomenal.' And then, I forget who told me, someone that was with us, 'Yeah, he won 'Idol' in Sweden.' And I was, like, 'Man, he's got pipes.' And I was listening. Then I went behind the monitor board a couple of times. And in my head, I'm, like, 'Wow! When SKID ROW has some downtime, I'm gonna get in touch with this dude and start a side project with him.' And obviously, that never happened. But as time went on and we got to the point to where we were with ZP and stuff, Erik was our first… I told Snake, I go, 'We've gotta check this guy out.' And along with Snake and the rest of the guys, and Nick, our producer, Nick Raskulinecz, were, like, 'He's the guy, man. Send him some songs.' So we sent him some songs that we were recording, just with a guide vocal on it, and it came back about 24 hours later, and we were, like, 'All right. He's the guy. Get him on a plane. Let's do this.'"