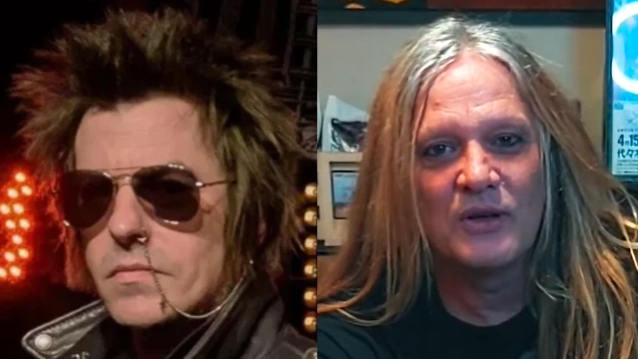 SKID ROW's RACHEL BOLAN On SEBASTIAN BACH: 'I Wouldn't Say We Were Friends; We Were Bandmates'

In 1999, SKID ROW reformed and, after a bit of shuffling over the years, featured a lineup consisting of Bolan, Dave "Snake" Sabo and Scotti Hill, alongside drummer Rob Hammersmith and singer Johnny Solinger.

Asked in a new interview with "The Chuck Shute Podcast" if SKID ROW's original 1996 split came as a relief to him, Bolan said: "Things were pretty bad within the band — with all of us, actually. [We] never heard from each other when we were home, and most of us lived 15 minutes from each other's house. And it started to get not fun at one point, because it was just all bullshit that went along with preparing to do stuff, and and whatever it was. It was a relief in a way. It was melancholy. It was a relief, and good, I get to go home and just chill and and recharge my batteries, but where are we going from here? So it was kind of waiting out a storm, so to speak, and just seeing what's what's gonna be there when it goes by. And it was years — it was years — and then we decided to get the band back together in 2000, and here we are, 20 years later, still having fun and doing a lot of shows. Well, not now, but we were doing a lot of shows [before the pandemic] — 100 shows a year. And that's a lot for a bunch of old guys. [Laughs]"

Bolan went on to confirm that he and his bandmates "were entertaining the idea" of reuniting with Bach following Harnell's departure. Rachel also shot down the possibility of a rekindling of his friendship with Sebastian, explaining: "Well… Here's the soundbite for Blabbermouth. I wouldn't say we were friends [when we were in a band together]. We were bandmates. You know what I mean? We're two very different people." Bolan added that he hasn't seen Bach "in years."

Last year, Bach completed a U.S. tour during which he celebrated the 30th anniversary of SKID ROW's self-titled debut album.

In June 2019, Bach issued an "open invitation" to the other members of SKID ROW's classic lineup to "get onstage and jam" during the vocalist's tour. A few days later, during an interview with Finland's Kaaos TV, Sabo confirmed that he would not accept Bach's latest overture. "I'm working with my band," he said. "This is SKID ROW, and this is what I do."