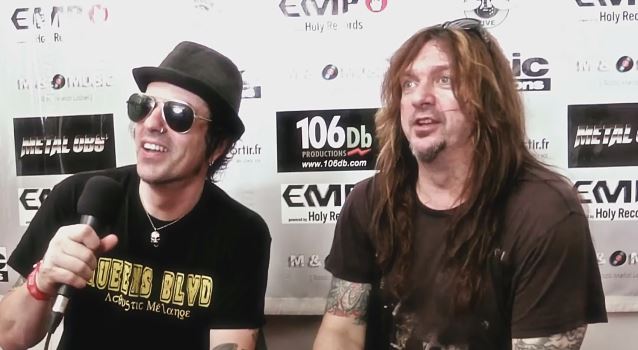 SKID ROW's RACHEL BOLAN On Singer JOHNNY SOLINGER: He Is Not Flamboyant And He Means What He Says

TV Rock Live conducted an interview with SKID ROW guitarist Dave "Snake" Sabo and bassist Rachel Bolan after the band's June 21 performance at the Hellfest in Clisson, France. You can watch the chat below.

Speaking about SKID ROW's lead singer of the past 15 years, Johnny Solinger, Bolan said: "Johnny grew up listening to a lot of the same stuff I did. He's not a super-flamboyant guy. He's just one-to-one, shortest-way-between-two-points kind of guy. And he just goes out, says what he means and means what he says. And his whole thing is, like, 'Let's go out and have fun and I'm gonna sing my ass off.'"

In a recent interview with Metal Assault, Solinger was asked how he feels about still being seen by a lot of fans as just a "replacement" for Sebastian Bach.

"The band would have either ceased to exist or they had to rebuild," Solinger replied. "It was just like a divorce. I'm the new wife and I knew what I was getting into when I took this on.

"You can be an old fan, of course, and then you can be a new fan, as long as you're a SKID ROW fan. The bulk and the heart of the band is still there — that's Rachel Bolan, Snake Sabo and Scotti Hill. You hear those guitars and that songwriting, you know who it is.

"I was very lucky to become a part of this, and 'Chapter Two' will be my fourth record with the band.

"For those who abandoned us, that's fine! If you're looking for pureness, you're not going to find it in this world. [laughs] If AC/DC can do it, so can we. So I don't really have a problem, and I don't see myself as a replacement. I see it as an evolution, just the way it turned out. I wear my own shoes and my own pants. I love singing the old songs but they're mine now. People that give it a chance seem to really like it, and I think my fan base has grown as the years have gone on. It's just been so long since the old lineup played live, it's been a decade and a half. So if they can't get over it, then we'll just lose those fans and get new ones. [laughs]"