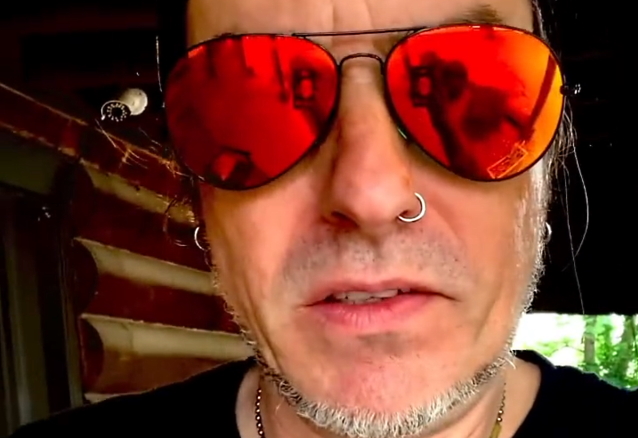 SKID ROW's RACHEL BOLAN On Upcoming Album: 'I Just Can't Describe How Awesome It All Sounds'

SKID ROW is continuing work on its long-awaited new album for a tentative early 2022 release via earMUSIC. The band is recording its new album in Nashville, Tennesse with producer Nick Raskulinecz, who has previously worked with FOO FIGHTERS, STONE SOUR, HALESTORM, EVANESCENCE, RUSH and ALICE IN CHAINS, among many others.

Bassist Rachel Bolan offered an update on the progress of the recording sessions for the LP in an Instagram video message on Friday (September 3). He said (as transcribed by BLABBERMOUTH.NET): "So this was day two of vocals. ZP was in there just tearing it up. Yesterday we finished a song that's probably gonna be the title track of the record… And he was working on a new song today, and it just sounds great. Wow! Holy crap. I can't tell you — I just can't describe how awesome it all sounds."

He continued: "I know I talk about Nick a lot and I sing his praises all the time. It's justified, man. For instance, the first song, we hear it, and it's just the skin and bones of it, when we write it and whatnot. And then we get in the studio and little bits here and little bits there [are added], and now that the vocals are on it, we put some harmonies and backup vocals, and the solos are on it, and it's pretty damn close to being finished, except for the mix. Oh, man, it just sounds good — so good. His ideas are so good. And yeah, I'm really pumped, as you can tell. A little tired, but pumped.

"I'm not crazy about the studio because it gets tedious at times. However, once your idea comes to life, and, like I was saying, you hear everything layered on it, and then you hear other ideas put on it that make it even better and better than you thought it was gonna be, man, it's so much fun. And that's what really lights me up and gets me off, man. Just hearing it — hearing it as a song instead of a ton of parts is amazing.

"So, that said, I'm really psyched," Bolan added. "I'm really looking forward for you guys to hear it."

In early August, SKID ROW celebrated the 30th anniversary of its classic second album, "Slave To The Grind", by performing it in its entirety at The Amphitheater at Rolling Hills Casino And Resort in Corning, California.

Last summer, Bolan told SiriusXM's "Trunk Nation With Eddie Trunk" that he and his bandmates would embark on a "Slave To The Grind" 30th-anniversary tour in 2021.