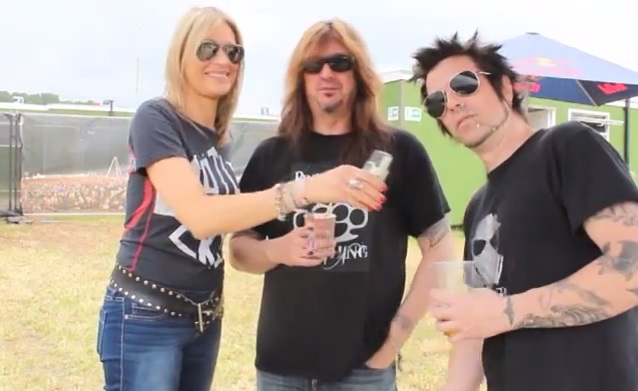 SKID ROW's SABO: 'I'm Amazed At The Fact That We Still Have The Opportunity To Go Out And Play Music For A Living'

Michelle Livings of TotalRock Radio recently conducted an interview with SKID ROW bassist Rachel Bolan and guitarist Dave "Snake" Sabo at this year's Download festival, which took place June 13-15 at Donington Park in Leicestershire, United Kingdom. You can now watch the chat below.

On the 25th anniversary of the release of SKID ROW's self-titled debut album:

Sabo: "To me, personally, I'm amazed at the fac t that we still have the opportunity to go out and play music for a living.

"When we started the band, I think we just wanted to be able to go out and write some songs and hopefully connect with some people. The fact that our music has been able to bring us around the world, it's one of the most humbling experiences that one can have. And these people give us the opportunity to live our dream out every day, and after 25 years, I think it's even become more pertinent to us in our personal lives. Just being able to be on the road, as we've been — we're gonna be touring for the rest of the year — and we're able to release new music. And it's an amazing existence, seriously. And [Playing Download] is the pinnacle of it, for us. This is a world-renowned festival."

Bolan: "Coming from New Jersey, Donington was just an ad in the back of Kerrang! magazine that we got out of… It came in a plastic bag, [because] it was an import magazine. And to be here in 2014 after reading that, when I was 15 or 16 years old, coming back here, it's amazing."