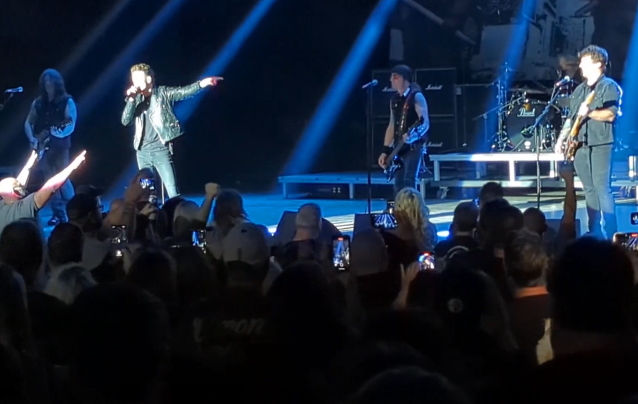 SKID ROW guitarist Scotti Hill was forced to miss the band's concert last night (Saturday, April 30) at Paramount Arts Center in Ashland, Kentucky after testing positive for COVID-19, the disease caused by the SARS-CoV-2 coronavirus. Filling in for him was one of SKID ROW's guitar techs.

SKID ROW singer Erik Grönwall addressed Hill's absence before launching into the band's classic song "18 And Life". He told the crowd: "Unfortunately, Scotti got COVID and he's home and resting. And luckily, we have the best and coolest fucking crew in the world. So this guy right here, that guy is usually a guitar tech but he's an awesome fucking guitar player. And this guy learned all the songs in less than a day. Give it up for Casey, everybody, c'mon. What a fucking hero."

Hell of a show last night in Ashland KY! I’ll put up samples throughout the day! Good time!

Happy New Year! We're kicking of 2022 with another 🚨 NEW SHOW ANNOUNCEMENT 🚨 Saturday, April 30th, join us for a HUGE...