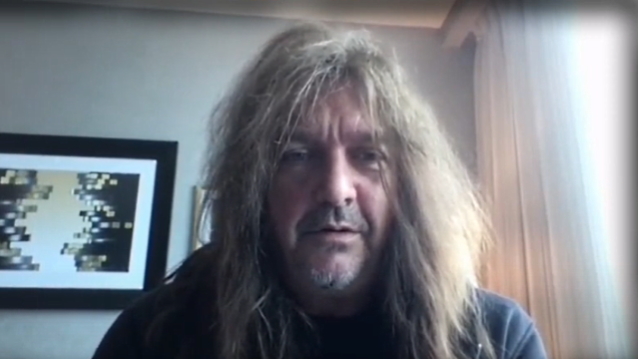 SKID ROW's SNAKE Has Embraced Music Streaming: 'You Have To Adjust And Adapt To Your Environment'

In a new interview with Jorge Botas of Portugal's Metal Global, SKID ROW guitarist Dave "Snake" Sabo spoke about the decline of the music industry as consumers value access over ownership and experiences over assets. He said (as transcribed by BLABBERMOUTH.NET): "I'm a fan of streaming — I'm a fan of the streaming services, whether it's Apple Music or Spotify or Pandora or Deezer or whatever. I think the only issue is being able to have visibility, to be able to let people know somehow that your music is out there and to give it a listen. That's the hard part — is getting through all the traffic, really. But that's the way it is for mostly any artist.

"All you can do is do your best to let people know that you have new music and it's worthy of their time, and that's word of mouth," he explained. "Someone will give the song a chance, and the next thing you know, they're telling their friends about it and people are streaming it. We've seen it on Spotify, and it's been amazing.

"Look, you have to adjust and adapt to your environment, and that's the environment we're in right now," Snake added. "So I have no interest in fighting it, because I enjoy streaming music myself. I think it's a great way to have 20 million songs at your fingertips. The choices are never-ending. But I just also think that with that, there's a lot of noise out there too that you have to sort of navigate through. But that's the way it is. So you do it."