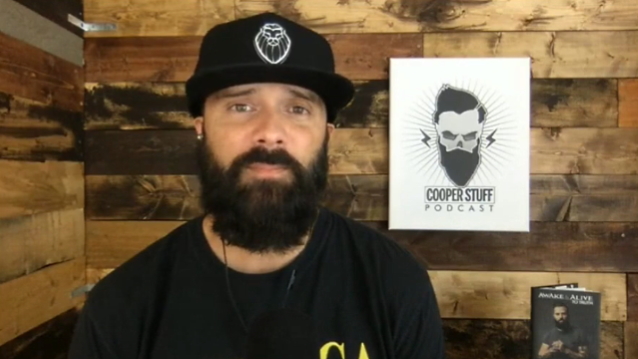 "I don't wanna use one scripture out of context, so I am aware that this is not… I'm not about to win a theological argument with this passage of scripture. [But maybe it will help you] understand what I'm getting at. You know the passage of scripture that says, 'To the pure, all things are pure.' And, of course, that's said in the instance of people eating meat that were sacrificed to idols. I think of that sometimes in terms of this. There are things that we go through in life that you liked. For instance, I've always loved comic books. I don't know. I've loved Spider-Man since I was a kid; my older brother loved Spider-Man. And I just was, like, 'Oh, these comic books are… They're so cool.' It just looked so great. And it never would have crossed my mind ever that it would be idolatrous in any way. I looked at the Green Goblin. The Green Goblin never looked like an actual goblin to me; it was a comic book character. So, to me, it was make-believe; it was 'good versus evil' and it was just something that I liked.

"One time I posted a picture on my social media… I collect toys and statues, and I've got an amazing statue of Venom. Venom is a Spider-Man villain. Venom is an alien. If you didn't know who Venom was, I guess you could think he looks kind of like a demon. But it never crossed my mind that Venom looked like a demon; he was an alien. I don't know. And so [some people were] really offended. And I understand why they were offended. That never meant that to me, and I'm not trying to dishonor the Lord.

"So I think that once you get into comic books, or if you collected rock albums when we were kids and these huge vinyl albums and they had all these awesome, I would call it 'fantastical' artwork. 'Fantastical', meaning Conan The Barbarian-type artwork of other worlds. And some of it was futuristic, and some of it was more like dragons and things like that. It's almost kind of like it's a world of its own that I think a lot of people never looked at, and it never meant something pagan to them or something like that. So a lot of the times I will just that's kind of what I was raised in. It never meant anything bad to me. So when I meet people that have a problem with it, I don't mind it at all. I just say, 'Hey, I understand where you're coming from. I want to honor God with this, and I don't believe it dishonors God any more than I would believe that 'The Lion, The Witch And The Wardrobe' would dishonor God. And I do realize there are Christians that do think that dishonors God. But for me, I think it's a great story of good and evil.

"My ideas usually come from, what do I think…? I mean, art is supposed to be provocative. I don't wanna sin; I don't wanna dishonor God; but I like the idea of saying something 'demon defiant' that might get somebody going, 'Oh, what is that? That's kind of cool. What does that mean?' Even if you're not a Christian, that sounds kind of cool. You defy demons in your spare time? Yes, I do. So let's have a talk about what that means. And it's a great conversation starter.

"Our album covers, I would say, usually try to reflect some sort of spiritual principle. Our album 'Awake' was me wrapped up in bandages, almost like a mummy, like I'd just come out of a coma from a wreck or something, and all you can see my eyeball. And it says 'Awake'. Somebody once said it was The Illuminati, because you could see my eye, but the bandages went like this and it made a triangle. [Laughs] At the time I didn't know what The Illuminati was, so I had to look it up. And I was, like, 'No, it's not illuminati.' But it's a great conversation starter. What is this about? Well, what this means is that I was dead to sin but I have been made alive to Christ. I was dead in my trespasses, but I have been made alive through the death of Jesus Christ. It's a great conversation starter, and I think that's what great art does, in my opinion."

SKILLET's latest album, "Dominion", was released in January via Atlantic.

Earlier this month, Cooper spoke to the "Idleman Unplugged" podcast about the criticism he and his bandmates have faced for playing "hard music", which is often viewed by some people as demonic or anti-religious. He said: "I just love loud music. I've always loved it since I was a kid. I just related to it. It probably was playing sports. There's something about the energy of playing a competitive basketball game or running track or wrestling or getting ready for that football game — whatever it was, there was something about that energy.

"I really don't want to use scripture cavalierly, but I will throw some scriptures out there that I think they mean something to me, and maybe it's applicable, maybe it's not," he continued. "But I think about this scripture that says, 'To the pure, all things are pure.' And one of the things that that scripture, as I've understood it to mean, is that sometimes there's going to be something, it may be attached to something that's really negative for someone, but maybe it's not negative for someone else. Maybe that could be that meat that was sacrificed to idols, as we see in the scriptures, and somebody's, like, 'Hey, that's not me anymore. I gave my life to Jesus. I don't want nothing to do with that meat.' Then you may have somebody else that's a Christian that's, like, 'I didn't even know this was sacrificed to idols. I just thought it was meat, and I was thankful that God gave it to me. I didn't know anything.' Music was a little like that for me.

"I never understood the roots of rebellion in rock and roll — sex, drugs and rock and roll," Cooper added. "That didn't mean anything to me. I just liked the way it sounded, man. And I understood God created music. The Devil doesn't create stuff; he distorts, right? So the devil comes in to steal — and kill and destroy, of course. But he wants to steal something that God made that was good and he wants to mess with it and change it to where he tries to get glory. And I always felt that music glorifies God. So some of this comes from an aspect that, to me, I was pure and I didn't know anything about rebellion. And I never got ready for that basketball game and was, like, 'Man, I feel like this is making me love the Devil.' It was just loud music, and it was cool. So some of it was for that. But I will say, on a deeper level, for me, I absolutely believe music belongs to God. There's something of eternity with music. The Bible doesn't talk about music a lot. But there is something eternal. We know that the angels were singing before we were ever created. We know that music is singing and worship. We know that's gonna be for eternity — it's one of the few things we have here that in some form is going to exist before the throne for always and always and always, when time has ended. So there's something about it that belongs to God. And my aim is, 'Hey, we're not letting the Devil…' It's like that great old Christian song, 'Why should the Devil have all the good music?' Of course, that's way back in the day. But we're not gonna let the enemy steal something that God created. He may have distorted it, but we're bringing that back under the Lordship of Christ, where music and art belongs, because everything is the Lord. The earth is the Lord's, and the fullness thereof — everything in it is his. So that's kind of the way that I view it."