Veteran San Francisco Bay Area metallers SKINLAB recently entered Trident studios in Pacheco, California with producer Juan Urteaga to begin recording their new album. Bassist/vocalist Steev Esquivel states, "Drums are done!!! And fuckin sick at that; no doctoring up or fuckin' beat detected... Paul [Hopkins] crushed his tracks out in three days and [they] sound great!! We all excited as hell to get this started. Huge thanks to Juan at Trident for sneaking us in between bands for some after-hours tracking!"

Steev continued, "As most of you know, we've been in talk with several different labels about the release of the new SKINLAB. As most negotiations go, things were taking forever, so we decidided to go ahead and begin recording this bastard without a label!! That's right — for the first time in our SKINLAB's career, we decided to take matters in our own hands and begin without the support of the 'big machine!' We believe in this new material so much that we're gonna record it on our own dime and our own time.

"Having said that, with the drums complete and ready for guitars and bass to be tracked, we will record the rest of the album at Snake's [guitar] Greendot studios in Berkeley with Snake handling production duties.

"We're fuckin' stoked! This is the first time the band has had complete control of everything. Right now, there are just scratch tracks of guitar and the shit sounds fuckin girthy as hell!! Can't wait to get this fucker recorded. We've pretty much nailed down our 'guy' who will be handling the mixing. It's a bit to early to announce as we're trying to align schedules.

"This will be by far the best SKINLAB... ever!! Expect nothing but pure heaviness... This album has everything a longtime SKINLAB will expect, but also a few other elements that we've added to the mix that are gonna blow you away. We're coming prepared for the beatdown!!"

Video footage of the drum-recording sessions for the new CD can be viewed below.

SKINLAB has uploaded a pre-production version of a new song, "In for the Kill", to its MySpace page.

The band's "In for the Kill" video was filmed in May 2008 at the group's warehouse in Oakland, California with new, up-and-coming director Jourdan McClure. The clip will feature an appearance by rebounding UFC fighter Nate Quarry and Greg Thompson.

SKINLAB released a live album, "SkinnedAlive!", in April 2008 via BCD Music Group. The CD was recorded on June 3, 2007 at The Metro in Oakland, California. 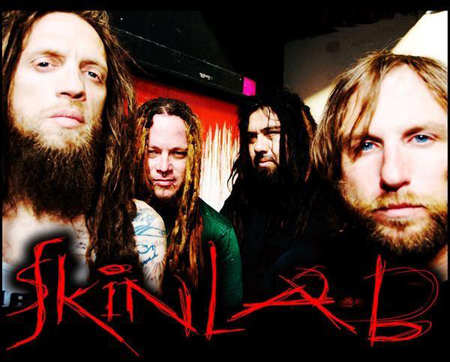