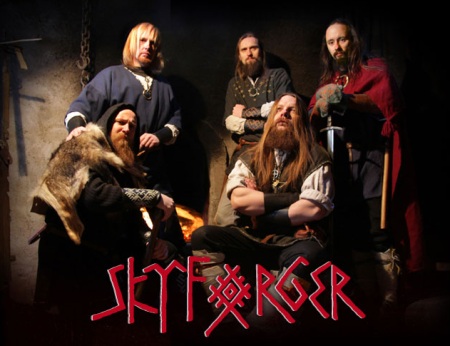 SKYFORGER was honored in the "Best Rock Album" category at the 15th annual Gada Balva ceremony (the Latvian equivalent to the Grammy Awards) for the band's "Kurbads" album, originally released on Metal Blade Records in April 2010.

The largest and oldest Latvian music awards show was held February 22, 2011 at the National Theatre in Riga, Latvia and was broadcast live on the Latvian channel TV3.

This marked the first time when a metal band was given this prestigious Latvian music industry award.

In other news, SKYFORGER was honored in the "Best Metal Album" and "Best Metal Band" categories on March 18 at the Latvian Metal Music Awards, organized by the local metal community, with the results determined via an online vote by Latvian metal fans .

Also on the SKYFORGER front, the band has parted ways with guitarist Martins, who has been busy with a new job and could not make the band a priority. His replacement is Egons, who is also member of world famous Latvian post-folk band ILGI. Egons is said to be a professional musician who also works as a producer and recording studio engineer. SKYFORGER states, "Egons has great work attitude and band is already busy working on a new songs."