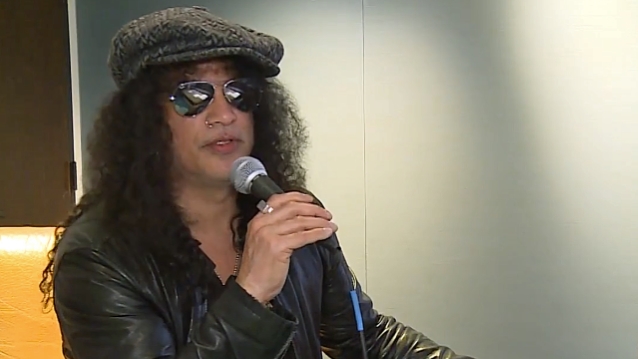 SLASH: AEROSMITH Is 'One Of The Last Real' Rock And Roll Bands Around

GUNS N' ROSES guitarist Slash has praised AEROSMITH, calling the legendary Boston rockers "a good example of what rock and roll is all about."

Slash first got to know the members of AEROSMITH when the band took GUNS N' ROSES on their first arena tour in 1988. More recently, Slash and his band THE CONSPIRATORS (with singer Myles Kennedy) supported AEROSMITH on the North American "Let Rock Rule Tour" in 2014.

Speaking to HardDrive Radio during a press junket for his upcoming solo album, "Living The Dream", Slash said (see video below): "AEROSMITH is the kind of band that young bands need to look at, 'cause they're one of the last real ones around. There's such a natural feel that they have and just a certain kind of swagger that just comes with the combination of people. And everything they do is what's coming out of their instruments — it's not taped or fucking phoned in. So it's definitely a good example of what rock and roll is all about."

Slash previously cited AEROSMITH as a key influence on his direction as a guitarist after hearing "Rocks" as a teenager.

"It really became my band," he told Rolling Stone in a 2014 interview. "It was really sexy, grooving, hard rock, riff-based shit with an out-of-control singer. It had so much angst and soul to it. It's really the band that pointed me in a direction when I started playing guitar."

On that 1988 tour, AEROSMITH watched as GN'R grew into a confident arena rock band of peers. "Slash doesn't make any bones about the influence we had on him," AEROSMITH guitarist Joe Perry told Rolling Stone. "They turned into a great, great band. They sure made their mark."

Slash will release his fourth solo album and third with his band THE CONSPIRATORS, "Living The Dream", on September 21. He and THE CONSPIRATORS will hit the road next month as well, with Slash also touring again with GUNS N' ROSES in November.