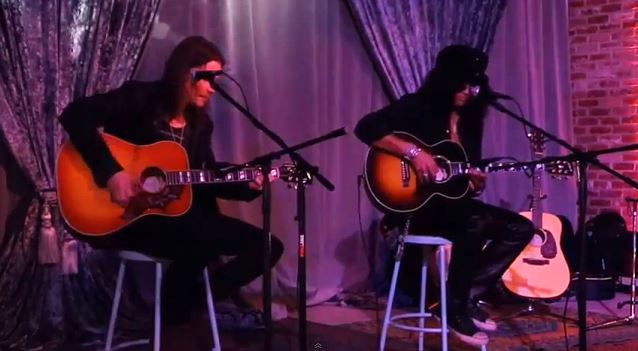 Slash and Myles Kennedy played an acoustic version of the GUNS N' ROSES classic "Sweet Child O' Mine" during the after-party for the first-ever motion picture Slash has co-produced, "Nothing Left To Fear", on Wednesday, September 25 in Hollywood, California. Video footage of the performance can be seen below.

Available on Blu-ray Combo-pack, DVD and On Demand starting Tuesday, October 8, "Nothing Left To Fear" is a harrowing tale in the spirit of the terrifying horror films of the 1970s. The movie is inspired by the legend of Stull, Kansas, which is surrounded by Internet folklore proclaiming the town to be one of the Seven Gateways to Hell. Wendy (Anne Heche),her husband Dan (James Tupper of "Revenge") and their kids have just moved to the small town of Stull, Kansas, where Dan is the new pastor. But in this sleepy community of friendly neighbors, a horrific series of occurrences awaits them: Their teenage daughter (Rebekah Brandes of "Bellflower") is being tormented by grisly visions. Her younger sister (Jennifer Stone of "Wizards Of Waverly Place") has been marked for a depraved ritual. And deep within the heartland darkness, one of The Seven Gates Of Hell demands the blood of the innocent to unleash the creatures of the damned. Ethan Peck ("10 Things I Hate About You") and Clancy Brown ("The Shawshank Redemption") co-star in this demonic shocker featuring original music by producer Slash and inspired by the real-life paranormal legacy of Stull.

"As a longtime fan of the horror genre, I want to produce films that are in an older tradition of the genre," said Slash. "That is to say, films that leave more to one's imagination, that are psychologically scary and character-driven, and what scares you is more cerebral than superficial. Slasher Films is my vehicle to realize that aim, and 'Nothing Left To Fear' is the first film with more to come."