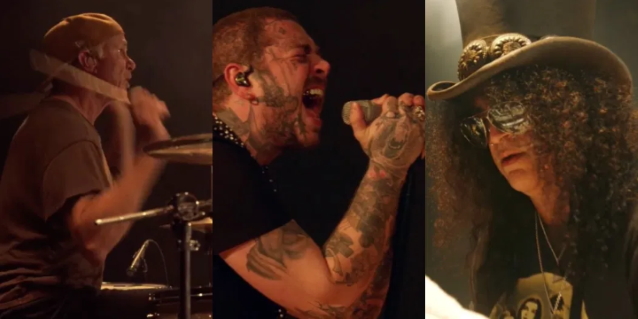 BLACK SABBATH singer Ozzy Osbourne was a featured guest on the Post Malone song "Take What You Want", which appeared on the rapper's most recent album, "Hollywood's Bleeding". Post also collaborated with Ozzy on the latter's latest LP, "Ordinary Man".

Speaking to Zane Lowe of Beats 1 about working with Ozzy on "Take What You Want", Post said: "Ozzy Osbourne, baby. I was in Utah because I had just got off tour. It's good, right? Ozzy went over to Watt's house. You've talked a lot before. He's a maniac. I said, 'Hey, you know what? Ozzy Osbourne's coming down. We're going to cut it and I'll FaceTime you. And you let me know what's going on.' We talked and it was like a big deal. Yeah. Ozzy Osbourne. I think he crushed it. I mean he was talking to Watt and Watt was telling me he was like this, 'Yo, this is my favorite that I've done since, you know, SABBATH and since I started my own, own way.' I was like, 'That's huge.' I'm like honored. Thank you very much."

Post Malone previously covered "All Apologies" live. He also has a couple of NIRVANA tattoos, including a portrait of Kurt Cobain on his knuckles and the songtitle "Stay Away" on his forehead.