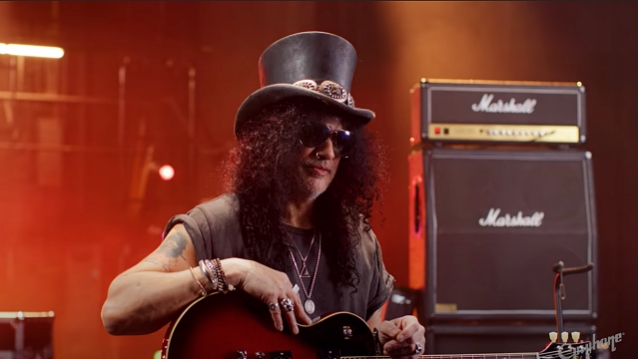 In a new interview with Germany's Radio Bob!, legendary GUNS N' ROSES guitarist Slash spoke about what it was like to be back on stage after being sidelined for more than a year due to the COVID-19 pandemic. He said (as transcribed by BLABBERMOUTH.NET): "GUNS just did a U.S. tour, which was a lot of fun. It was great because you had all these crowds that were super hungry for live gigs. And so it was a very energetic tour. At the same time, [we] also had a lot of intense restrictions. We didn't have any kind of aftershow guests — no guests whatsoever — and we never left the hotel pretty much the entire time. And everybody just had to really keep it together so that we didn't have somebody get sick and have to postpone the tour and all that kind of stuff. But we made it through unscathed. So it was good."

"We're F'N Back!" came on the heels of the "Not In This Lifetime" run that began in April 2016 and became the No. 3 highest-grossing tour in the history of Billboard Boxscore.

As previously reported, GUNS N' ROSES will release a new four-song EP, "Hard Skool", on February 25, 2022. The effort, which is exclusive to the GUNS N' ROSESofficial store, contains the two new songs the band released in the last two months — the title track and "Absurd" (stylized as "ABSUЯD") — as well as live versions of "Don't Cry" and "You're Crazy".

GUNS N' ROSES is now said to be working on a new studio album — the first under the GUNS banner since "Chinese Democracy" and the first to feature Rose, Slash and McKagan since 1993.