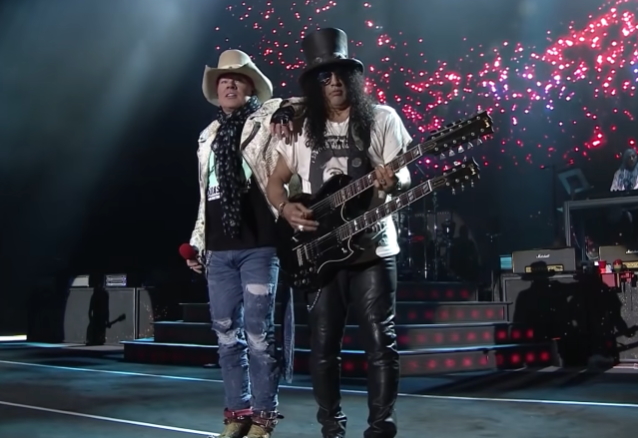 In a new interview with Japanese music critic and radio personality Masa Ito of TVK's "Rock City", GUNS N' ROSES guitarist Slash spoke about what it has been like for him and his bandmates to return to the road after being sidelined by the pandemic for the past couple of years. He said (as transcribed by BLABBERMOUTH.NET): "It's going great. The European tour has been really pretty fantastic, considering this is the first time we've been touring international since 2019.

"There's definitely a sense of pent-up expectations after not having had any real concerts or any kind of real live activity for so many years after the lockdown and all that," he explained. "So there's definitely some pent-up energy being expelled."

Regarding GUNS N' ROSES' current live performances, Slash said: "We did a three-and-a-half-hour show — we have been on this tour. We've been playing three hours plus. Last night was three and a half hours. We played 30 songs.

"It's good. It's fun," he continued. "We play that long because we enjoy playing. It's not because we have a mandate to play for three hours. It's just we get going and we just can't stop."