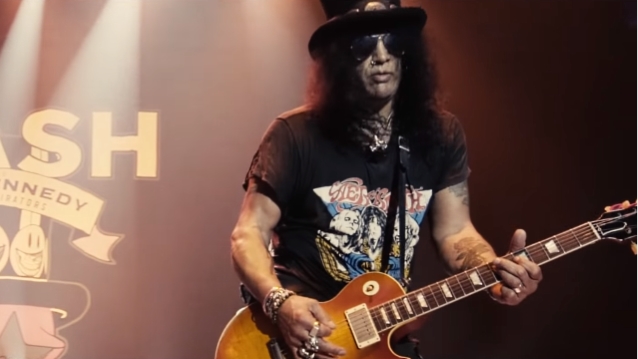 SLASH FEATURING MYLES KENNEDY AND THE CONSPIRATORS have released the official music video for the song "Call Of The Wild". The clip was shot in Poland during the band's "Living The Dream" 2019 tour and was directed by Sturge Media.

"Call Of The Wild" is taken from SLASH FEATURING MYLES KENNEDY AND THE CONSPIRATORS' latest album, "Living The Dream", which was released last September via Slash's own label Snakepit Records, in partnership with Roadrunner Records.

Regarding the "Call Of The Wild" track, Slash says: "'Call Of The Wild' is a riff I brought to the band when we were on a break during the 'World On Fire' tour. I can't remember the nucleus of it or where it came from, but it just was a cool riff and something I felt pretty strongly about. In my mind, it was always of paramount importance to get back to that particular riff and chord progression. Sometimes you get an idea and you're committed to it and you have to see it through. And this was one of those ideas."

Added singer Myles Kennedy: "It's probably one of my favorite riffs on the record. And the whole thing came together really nicely. The lyric revolves around the idea of burning out on this technology-obsessed world that we live in and coming to the realization that it's time to power down and get back to the essence of living. 'Call of the wild,' you know?"

"Living The Dream" is Slash's fourth solo album, and third with Slash and his bandmates Myles Kennedy (vocals),Brent Fitz (drums),Todd Kerns (bass and vocals) and Frank Sidoris (guitar and vocals). The artwork was created by renowned visual artist Ron English.