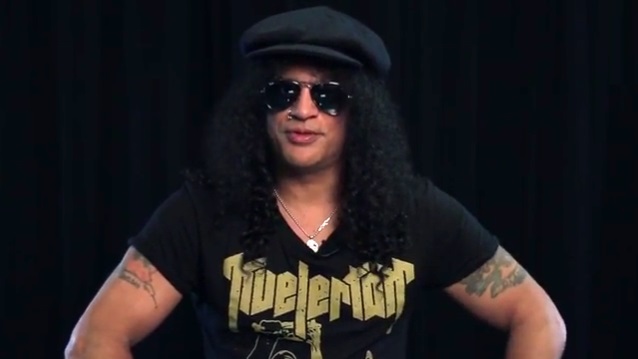 SLASH: Kids Today Just Want To Grab A Bunch Of Cash, Do As Little Work As Possible, And Retire

Legendary guitarist Slash believes that a lot of younger musicians lack the work ethic of their older counterparts and are interested in making as much money as they can as quickly as they can before calling it quits.

"You know what's wrong with the whole fuckin' entertainment business?" the former GUNS N' ROSES axeman tells Independent.ie. "Kids these days just want to grab a bunch of cash, do as little work, with as little integrity as possible, and just fucking retire, man.

"You wanna know why I got into this business?" he asks. "Because I loved playing. I loved doing concerts. I loved recording. And that's still what I'm in it for today."

Asked how he would feel if his own sons (10-year-old Cash and 12-year-old London) came to him one day and told him they'd like to be rock stars, Slash said: "If my kids wanted to get into rock 'n' roll, I'd say 'Look, if you want to pick up an instrument, play it because you love the sound it makes. If you want to write songs and be in a band, that's fine too. Just know there's nothing to be gained from it except personal enjoyment.'"

He added: "The chance of getting anywhere with it are so slim that you really need to be doing it for the love of it and not have any expectations. But they're my kids, and I'm going to support them whatever they decide to do. Right now, I don't see them headed in that direction. But then it didn't click with me either 'til I was almost 15 years old."

Asked by Vintage Guitar awhile ago who or what sparked his interest to become a guitar player, Slash said: "Steven Adler, the original drummer for GUNS N' ROSES, got me interested in playing, although I'd been raised on music. When we were about 15, we used to ditch school together. After his grandmother would leave for work, we would go back to his house and hang out until she got off work, then we'd split and act like we were at school all day! He had some piece-of-crap guitar and amp. We'd turn on KISS records really loud and, even though he didn't know how to play, he'd go through the motions. So I thought I'd start playing bass so we could jam together, although I didn't even have an instrument. I went to a neighborhood music school and thought I'd take lessons. The guitar teacher started playing Eric Clapton and Jimmy Page stuff, and I told him that was really what I wanted to do. So I switched from the idea of playing bass to playing guitar. Then consequently, Steven went from playing guitar to playing drums. So that's pretty much how it started."