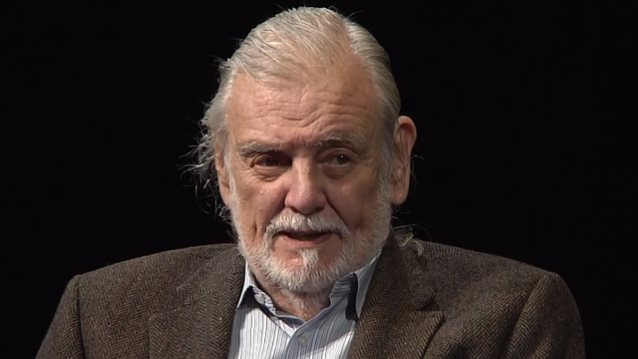 According to The Pulse Of Radio, GUNS N' ROSES guitarist Slash, METALLICA axeman Kirk Hammett and Rob Zombie all reacted online to the death of filmmaker George A. Romero, who changed the horror genre in 1968 with his classic "Night Of The Living Dead" and invented the modern concept of the zombie. Romero, who died on Sunday (July 16) at age 77 after a brief battle with lung cancer, also directed the zombie masterpieces "Dawn Of The Dead" and "Day Of The Dead", while collaborating with Stephen King on 1982's "Creepshow".

Romero told The Pulse Of Radio years ago that he tried to break away from the horror genre but that was where he had his greatest success. "The times that I've gone out away from the genre, the things that I did didn't make a lot of money," he said. "You know, I don't mind it. I was reflecting back to right after 'Night Of The Living Dead': I was reluctant, and the second film we did didn't even get distribution. Actually, the next three films weren't horror films. I tried for a number of years to resist it and none of those things went out and made any money 'cause everybody wanted me to do 'Night Of The Living Dead' again. So we did 'Dawn Of The Dead', and I guess that really sealed my fate 'cause it was the most successful of the three."

All three musicians are massive horror fans, with Slash also a producer of one thriller and Rob Zombie a writer, producer and director of seven genre films.

Slash wrote online about Romero, "Trailblazer is an understatement. We will miss you."

Slash told Rolling Stone a while back, "'Night Of The Living Dead' was a very ominous, haunting and brutal movie, and I remember specific scenes that have stayed with me all these years."

Hammett, who has a vast horror collection and has also published a book and staged a genre convention, called Romero the "founding father of the modern zombie movie" in his own Twitter post, adding, "long live Romero!"

Rob Zombie chimed in, "I can't believe George Romero has died. All the zombies owe him everything! He was the master."

Romero's other movies included "Martin", "The Crazies", "The Dark Half" and three more installments of his "Dead" franchise. He was set to produce a seventh at the time of his death.