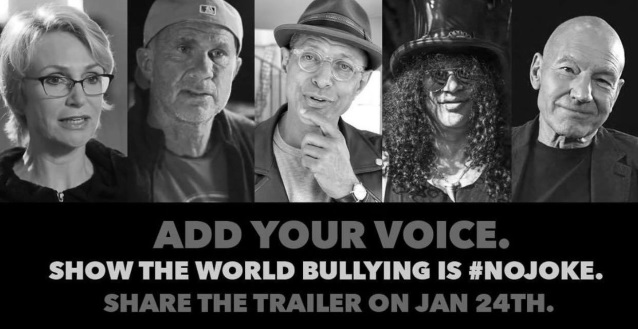 Lofty Sky Entertainment has release a trailer for its newest film, "#NoJoke".

"#NoJoke" is a documentary that follows singer Andrew Cole as he sets out to convince his musical idols to help him record a song in support of victims of bullying. Along the way, he's joined by the likes of Jeff Goldblum, Slash, Patrick Stewart, Lemmy, Chad Smith, Jane Lynch and more, who share their talents and their sometimes painful experiences with bullying.

Andrew's journey to understand bullying leads him to experts and to the ghosts of his own past — going beyond the tropes of today's anti-bullying campaigns to the heart of a complex and emotional issue.

"#NoJoke" is written and directed by multiple Gemini Award recipient and Hot Docs winner Manfred Becker, and is executive-produced by Adam Leipzig, former president of National Geographic Films and SVP at Walt Disney Studios. Adam has been behind films such as "March Of The Penguins", "The Way Back", "Titus", and most recently "A Plastic Ocean". The film is produced by Peabody Award winner and three-time Canadian Screen Award nominee Jason Loftus, CEO of Lofty Sky Entertainment.

The trailer includes footage with several of the artists who gave of their time and shared their talents or their stories of bullying, including Jeff Goldblum, Sir Patrick Stewart, Slash, Steve Vai, Meat Loaf, Chad Smith, Julian Lennon, Cedric The Entertainer, Jane Lynch, Lights and Ozzy Osbourne.

"We have great respect for the artists who contributed to make this possible," says Loftus. "Frankly, at the outset, no one knew who Andrew was and there was really no reason for them to do so. We're thankful that so many of them cared. Some were affected by bullying — as victims or as bullies themselves — and wanted people to know they're not alone. We also believe this film adds something important to the discussion about bullying. Bullying hurts, but what can we do about it? This film shows that there are different perspectives and views on what to do, and whether it's working. And at times it challenges our conventional ideas–including how we draw the line between victim and perpetrator. We think it's an ideal time for this conversation, and we thank the experts who participated in this project. We hope it will spark both personal reflection about how we treat each other, and discussion about how we best approach this issue together."

The launch of the trailer was backed by close to 350 supporters, nonprofits and influencers with a social reach over three million people in a successful campaign on Thunderclap.

A release for the film has not yet been announced.