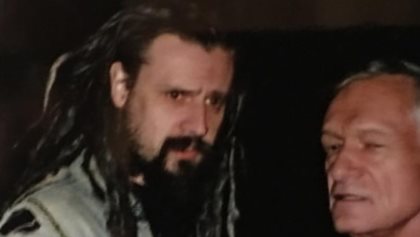 According to The Pulse Of Radio, Rob Zombie and Slash were among the rock artists who paid tribute on social media to publishing titan and Playboy founder Hugh Hefner, who passed away from natural causes on Wednesday (September 27) at the age of 91. Hefner died at his home, the Playboy Mansion, where many legendary rockers — including those who honored the man online — no doubt spent a few wild nights.

Rob Zombie posted a photo of himself and his wife Sheri with Hefner, writing, "Meeting Hef back in 2001 at the Mansion. Crazy place. Glad I got to party there. RIP to the one and only. The man in the silk pajamas."

FOZZY's Chris Jericho posted the same picture, writing, "I'd say he had a pretty good run."

Hefner started Playboy in 1953 after leaving his job at Children's Activities magazine. Although the nude pictorials of women in the magazine created an uproar among the more conservative sectors of America, circulation of the magazine hit one million subscriptions by 1960 and was selling upwards of seven million during the 1970s.

Hefner branched out with Playboy clubs, resorts, casinos, his own television channel and the opening of the Playboy Mansion, which hosted many a legendary party over the years for legions of celebrities and musicians.

Meeting Hef back in 2001 at the Mansion. Crazy place. Glad I got to party there. RIP to the one and only. The man in the silk pajamas. #hughhefner #playboy #robzombie #sherimoonzombie #playboymansion

A great man, entrepreneur and innovator. Your legacy lives on. #Hefpic.twitter.com/36cRzlUPRw