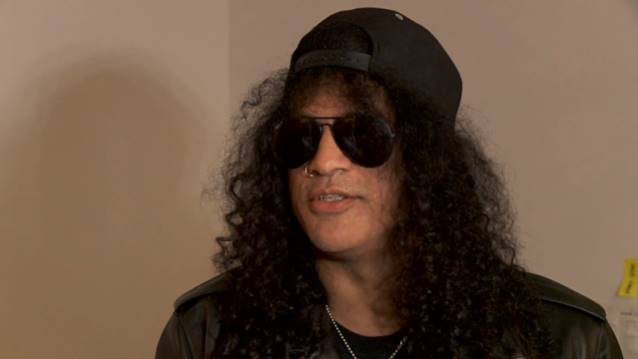 Legendary guitarist Slash (GUNS N' ROSES, VELVET REVOLVER) threw the first-ever musician-focused Hackathon, titled Slashathon, at Capital Factory during Austin music week (March 12). For seven hours straight, teams of technology developers worked to create new and interesting music-oriented applications for promotion on-the-spot. After the seven-hour window, developers gave full demo presentations of the hacks to Slash, who was joined by fellow judges Bram Cohen (Bitorrent) and Robert Scoble (first Microsoft employee, Rackspace). Three winners were selected (see list below). The Grand Prize includes a Gibson guitar autographed by Slash, $1,000 dollars and the opportunity to have Slash use the winning hack with the release of his new album with MYLES KENNEDY AND THE CONSPIRATORS, due out in early fall 2014.

Slashathon — powered by Geeklist — offers developers a unique challenge to create solutions for musicians to engage and grow their communities before an album release.

"Thank you to all the developers who put forth their best efforts in record time for the first-ever Slashathon," said Slash. "It was all brilliant. I'm looking forward to doing this event every year."

Stephen Wolfram — the British scientist, theoretical physicist, chief designer of the Mathematica software application and the Wolfram Alpha answer engine (Microsoft's Bing, Apple's Siri, as well as Google and Yelp — dropped into the Slashathon and visited with the guitarist.

The winners of the 2014 Slashathon are as follows:

Winner of the first prize, presented by Slash: Slash TV - Any user in any place can create a rock video for a new album from any mobile phone within 30 seconds.

- On a mobile device it's hard to film a video, but music stickers are a way to make a video more compelling. With Slash TV, you're able to promote an experience with stages and digital stickers to record your own rock video.

Second-Place Prize: Pretune - As an artist you don't have time to spend marketing new songs.

- Pretune would automatically promote your album and have the crowd reveal the song bit by bit. Fans can unlock the song progressively by logging in with Twitter or providing their email address.

Third-Place Prize: Crowdroar - Real-time feedback from the stage on how people are reacting to songs you never played before via a loudness meter that shows up on a Google Glass display.

Slash wrapped-up his run in Austin during South By Southwest with a performance last night (March 13) at Butler Park. Slash performed "Foxy Lady", "Red House", "Purple Haze", "All Along The Watchtower" and "The Star-Spangled Banner" at the "Jimi Hendrix Celebration" with Wayne Kramer (MC5),Rusty Anderson (Paul McCartney),Dave and Phil Alvin and Robby Krieger (THE DOORS) on the Outdoor Stage at Butler Park in Austin. 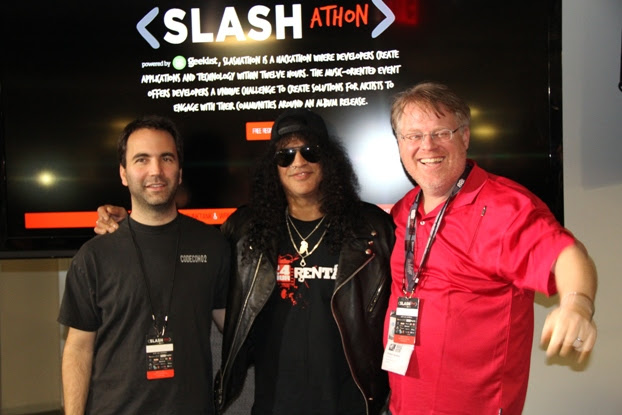