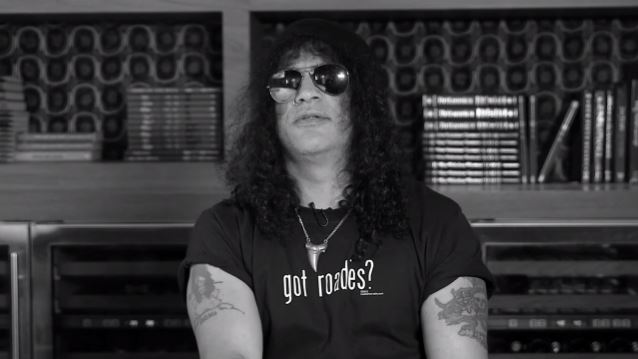 Former GUNS N' ROSES guitarist Slash listed off his five favorite horror movies for Rolling Stone, and told the magazine why movies like "The Exorcist", "Night Of The Living Dead" and "The Omen" still haunt him to this day. Check out the clip below.

Slash earlier in the year launched a FanBacked fundraising page for his upcoming horror movie "The Hell Within". The film will be directed by Dennison Ramalho, who contributed to the cult anthology film "The ABCs Of Death 2" and written by Jeff Buhler, who penned the script for "The Midnight Meat Train". It will be produced by Slash under his SlashFiction banner, in partnership with Benito Mueller and Wolfgang Mueller of Barry Films.

"The Hell Within" follows a woman from New York on a quest into the heart of the Brazilian jungle to save a missing girl, only to discover that the child was just the beginning.

"The Hell Within" will be released in Barco Escape, a multi-screen, panoramic movie format from Barco, a manufacturer of digital cinema technology. Slash called Barco Escape "a game changer," adding, "It's totally immersive and brings the movie going experience to a whole new level."