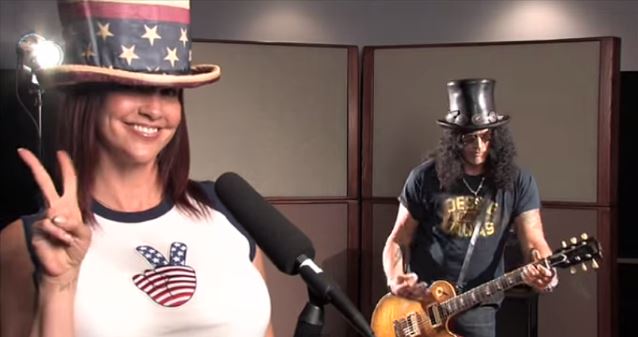 SLASH's Wife On Upcoming Divorce: 'There's No Bad Blood — At Least Not Yet'

Slash's soon-to-be-ex-wife says that her split with the former GUNS N' ROSES guitarist is "amicable" and insists that "he's gonna do the right thing for me and his children" in the couple's upcoming divorce proceedings.

Slash filed for divorce from his wife of 13 years, Perla Hudson, in late December, citing "irreconcilable differences" and is asking for joint custody of their two sons: 12-year-old London and 10-year-old Cash. He lists June 15, 2014 as the date of their separation.

TMZ caught up with Perla in Beverly Hills this past week and asked her about the breakup of her marriage. "It's pretty amicable," she said (see video below),adding that she still talks to Slash regularly. "We have children together," she said.

Asked how their assets are going to be divided considering that she and Slash reportedly did not sign a prenuptial agreement when they tied the knot in 2001, Perla responded: "I don't know how any of that's gonna work, but I know he's gonna do the right thing for me and his children, as I would do the right thing to him. Like I said, it's amicable, so there's no bad blood — at least not yet."

Regarding the fact that Slash and his reported new girlfriend Meegan Hodges appear to have gotten a matching set of tattoos of GPS coordinates, Perla said: "They can do whatever the hell they wanna do. Whatever." She added that there are no hard feelings at all between her and Slash. "Not at all," she said. "I like [Meegan]. I think she's a nice woman. Everything's really cool and amicable."

She continued: "[Slash and I] had a really long, lasting, loving relationship for a long time. We're best friends, we're business partners, and we just wanna do what's best for our kids."

This isn't he first time things have been rocky between Slash and his wife. In 2010, Slash (whose real name is Saul Hudson) filed for divorce from Perla, but decided to give their marriage another shot two months later. The following year they renewed their wedding vows.

SLASH FEATURING MYLES KENNEDY AND THE CONSPIRATORS will be on the road through June.