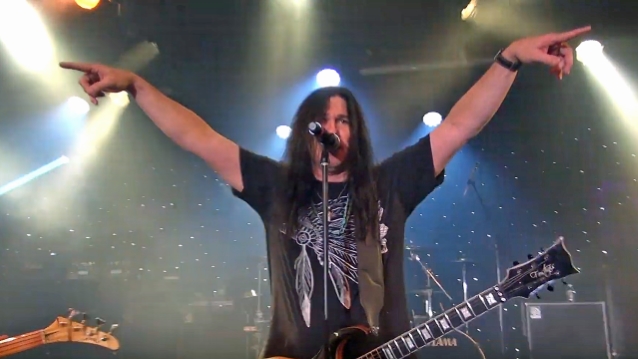 Sally Steele of Vegas Rocks! recently conducted an interview with SLAUGHTER frontman Mark Slaughter and bassist Dana Strum. You can watch the entire chat below. A few excerpts follow (transcribed by BLABBERMOUTH.NET).

On whether they thought their career was over when hair metal's popularity took a nosedive in the 1990s in the wake of grunge:

Mark: "I think it's one of those things — a lot of bands stopped touring, and we continued to tour. This is what we do. It's a natural process for us, what we do. We're a tiger that never changes its stripes. We always did what we did."

Dana: "I think our biggest thing was you've gotta be who you are. We were big lovers of a lot of bands — from BLACK SABBATH to LED ZEPPELIN to AC/DC — and if any one of those bands didn't sound like their band, I don't know why anybody is there. So, for us, we went though those lean times driving vans and driving rental cars."

Dana: "But we kept playing and we played the songs that we believed in. And what's funny is many of those came back around, and here we sit today, playing those songs. We're lucky we ever had 'em."

On whether SLAUGHTER has any plans to release any new material:

Mark: "It really is about art for making art more than it is really a money-making situation. Playing music live is what we love to do. And even if I had some new music and brought it out here with the band, people really don't care. They still wanna hear the hits that they know. It's more of 'remember when.' And we're not running away from that — we know where we came from, and we also know that people want to hear those hits."

Dana: "If you saw the guys from THE BEATLES playing, or if you saw… LED ZEPPELIN finally does this reunion, everybody in their mind has the setlist: 'Whole Lotta Love', 'Stairway To Heaven', 'Heartbreaker'. They already made it up in their mind. They wanna hear it, because these are the ones they love. Instead of running away, it's, like, why does it suck if people loved what you did, no matter what group you are? Every group out there has songs that people loved that you did. Then do them. And don't run away from them."

Mark: "And we're not running away. Look, we only get about an hour to play anyway. And we still have to leave a couple of our hits off because there's not enough time. But still, we try to entertain and try to make it as energetic as possible. It's one thing about this band is we never lost that side of it. We still have a love to go out there and kick some ass, for sure."

Mark: "When I did all that stuff, I was writing songs and I had enough for a collection of music and I just put it out there because, again, an artist makes art. That's what you do. I just go out there and make songs. I go home and write. And I'm excited about new guitars and new things. It's just what I do. It's almost like a hobby that I never fell out of love with, so I still do it."

Dana: "There's never a time when I call Mark and there's not a guitar [playing] in the background. There's always something in the background. He's playing. And that's what he enjoys to do. How great is it that somebody that picked up the guitar when they were young still actually likes to do that? The truth is, when we're all out there… everybody can rewind the clock and be the kid you once were. What a terrible thing to do to make people happy for a living. That's everybody's job. Everybody in the entertainment business's job is to go be a stupid entertainer and make people happy for a living. What a great job."

On what they want people to know about SLAUGHTER that they may not know:

Mark: "Exactly. I say thankful. And the other side of it is every time we play shows, we look at it with a thankful heart. We look at is as we enjoy it. It's not like something that we're just clocking in. A lot of people, it's almost like a job, that they are clocking in. For us, it never is. We just go out there and do it."

Dana: "It's fun to be amazed. And I think that both of us that wrote it, created it, recorded it are amazed that something that you do in a small room under circumstances that don't seem like it's ever gonna work out actually not only last the test of time, but that brings people a lot of joy and a lot of happiness. And again, what a great job to make people feel good and feel happy. It's different. There's many bands where those people didn't make that stuff up, but we did. So when we play it and hear it and you see somebody singing or lipping along or dancing along, you're, like, 'How lucky are we that something we made in a little crappy room almost 30 years later brings people a lot of happiness?' With everything going on in the world, how lucky are we?"

Mark: "We're the only band from our genre that wrote, produced and still perform our own music. It's not us doing a song that somebody else wrote. So I think it's a little closer to home, and in that side of it, we look at our statements, we know what the people are listening to, and we take note. We try to play those songs for that reason."

On whether SLAUGHTER could continue without Mark or Dana:

Dana: "You can't do SLAUGHTER without Mark Slaughter. And it's very simple. When Mark Slaughter decides he doesn't wanna sing SLAUGHTER music anymore, it's done. It's that simple. It's done. You wouldn't do it — it was not only a namesake, but it's a style-sake and it's a vibe-sake. Somebody says, 'Look man. I don't want to.' Then you know what? 'Thanks for all the great years, I'll still talk to you. Okay.'"

Mark: "That's the thing with Dana and I, first and foremost, when we started the band out of the VVI [VINNIE VINCENT INVASION] thing, we were friends first. And I think that that's a key point to have longevity in any side of it. And that's, I think, what carries into the music and to the performance."

Dana: "It is really different, because we recorded under such bizarre [circumstances]. And where we came from. We started with a guy that people looked up to that was from KISS [Vinnie Vincent]. We ended up doing our own thing, going on the KISS tour, and made our own way. And because we came from that weird place, we were appreciative of that weird place. So, no matter what, there could be a moment or two, I don't think there's ever been a show where one of the two of us or both… even [former SLAUGHTER drummer] Blas [Elias], when he plays with TRANS-SIBERIAN ORCHESTRA right now, doesn't close his eyes for a minute and think, 'You know how fortunate we are. You know how lucky we are that this many years later, people even accept us doing this stuff.' You couldn't get any luckier. 'Cause there's so many great entertainers and the rug gets pulled out from under them and they never do play again. Or there's great musicians, and they're all over in clubs all over the place. And you're, like, 'God, look how good that guy is!' But it never really happens, never really works. So, to know how lucky you are, and I know we do, there's kind of no better feeling. Nobody said when we recorded that first song, 'What's gonna happen in five years?' Nobody even asked that question."

Mark: "We don't even think about it. I think the key point even right now is just to go out and really just keep delivering the music that we started with almost 30 years ago — actually it is 30 years ago. But the truth of the matter is it wasn't released 30 [years ago]. But, at this point, yeah, it was 30 years ago."

SLAUGHTER's last studio album was 1999's "Back To Reality".

Mark's latest solo album, "Halfway There" was released in 2017. The follow-up to 2015's independently issued "Reflections In A Rear View Mirror" was made available via EMP Label Group, the U.S.-based label of MEGADETH bassist David Ellefson.